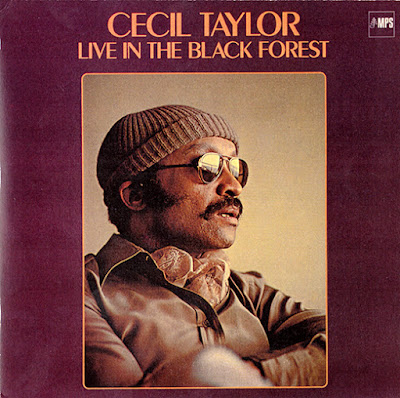 Taylor didn’t typically go on the road with the same bands he recorded with. Throughout his career, studio sessions have been relatively rare; live recordings make up the bulk of his discography. But in 1978, he took this Unit on the road for several weeks of shows in Europe, at least three of which were documented, two of them on albums that are among his greatest work.

Live in the Black Forest was the first to appear, on the unjustly obscure MPS label. Featuring two 25-minute pieces recorded on June 3 for broadcast on German radio, it’s a somewhat more “crowd-pleasing” and less abstruse set of music than the Unit’s self-titled debut or the crushing 3 Phasis. The first piece, “The Eel Pot,” begins with solo piano, followed quickly by the entry of Malik and Lyons (playing unison phrases) and then Ameen. Jackson hits huge thunderous tom rolls, and the band has become fully present. Then things can truly get started. Piano and trumpet exchanges, violin and alto saxophone tinkering at the margins. Martial drumming. There’s bass work, but it’s not particularly high in the mix at first; only later does Sirone’s forceful plucking assert itself, when the group becomes, of all things, a piano trio, albeit the most aggressive one I’ve ever heard. Jackson is playing something close to a death metal blast beat, as Taylor dances across the keyboard like a maniac and Sirone throbs between them. The next player to re-enter after this thunderous passage is Ameen, offering almost Bela Bartók-like stabs as though to pay tribute to the concert’s central European location. He and Taylor duet passionately, with Sirone still lingering in the background. Eventually, the full ensemble returns to roaring life, and the piece comes to a raucous close, celebrated by wild applause from what sounds like a large audience.

The disc’s second half, “Sperichill On Calling,” is more or less in the same spirit as its predecessor, but it’s less aggressive, a midtempo marathon with occasional eruptions. Around the 11-minute mark, Jackson bursts into a particularly aggressive drum solo, smashing the cymbals and battering the snare, as Malik’s trumpet unleashes a repeated, fanfare-like figure. Malik gets a lot of solo space during “Sperichill,” his rippling upper-register lines extraordinarily full and vibrant. When Taylor takes the lead, his playing is often quite delicate; during one quiet passage, he and Ameen duet totally unaccompanied, and it’s possibly the album’s high point. Again and again throughout this group’s discography, it becomes unmistakable that the violin is the most important instrument, besides the piano, to the whole project. Two decades later, on Algonquin (recorded 1999, released 2004), Taylor would explore this combination of sounds again, in a live duet with violinist Mat Maneri at the Library of Congress.
Posted by Zen Archer at 2:43:00 PM