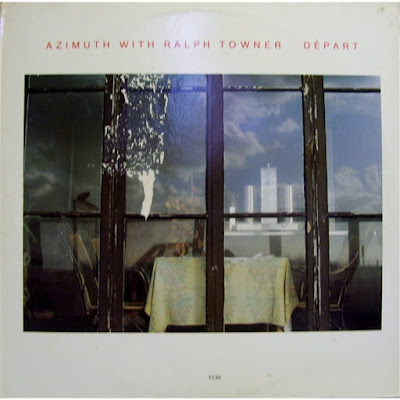 For its third outing, Azimuth welcomed the strings of guitarist Ralph Towner. “The Longest Day” opens in Solstice territory, setting out through a drizzle of piano and 12-string. Winstone’s overdubs visualize gossamer veils of more distant storms, while Wheeler’s soulful trumpet shines like the sun beyond them. Winstone takes her voice to unexpected heights, pulling a banner of time across the sky into the contemplative piano introduction of “Autumn.” There is no falling. Rather, we get the stillness of those leaves before they die, hanging on with their last vestments of color as the winds arrive to shake them from their boughs. Winstone hangs words in the air amid Towner’s almost pianistic fingerings and Wheeler’s staccato cries. “Arrivée” is just that, but is one of many destinations in this sojourn. Incising solos leave their wounds, closed at last by the plasma of Winstone’s mellifluous protractions. This is followed by a quartet of so-called “Touching Points,” which further extrapolate vocal information from instrumental sources, and vice versa. Wordless fibers are at once spun and frayed in passages of intense physicality. Towner is put to improvisatory task, adding tentative yet appropriate ornaments of his own. The organ drone of the title track respires beneath Winstone’s dips into thermal bliss. Words spread their branches, wrought in tinsel and blown glass. The album ends with a reprise of “The Longest Day” for piano alone. Resplendent and far-reaching, it is a bittersweet ending to Azimuth’s most fully realized effort, through which the project honed its sound to an art.

Azimuth was one of ECM’s most deftly realized acts, and it continues to open like a slow cloudburst every time I immerse myself in it. Its malleable formula provides seemingly endless room for possibility. Winstone’s voice sparkles in the soft focus of consistently sensitive production, a slowly flapping bird with nowhere to go but up. She and Taylor are ideal partners, forging as they do a silent smolder of emotional bonds, while Wheeler heaves his own powerful feathers with conviction. The brief addition of Tower heightens their collective sound, even as it tethers them to the earth. This is a classic set of three seminal albums, each a movement in a larger suite, where souls can dance in motions so slow that they appear as still as ice, and are just as vulnerable to heat.
Posted by Zen Archer at 12:56:00 AM