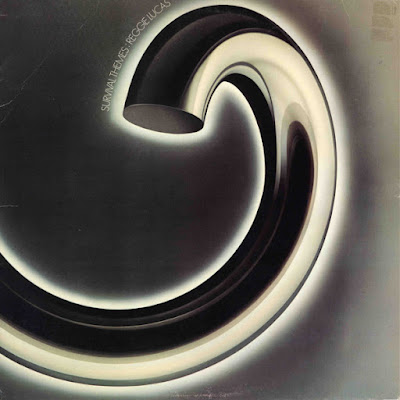 Up until now, Reggie Lucas has been best known for: 1) his creative, funky rhythm guitar work (and occasional soloing) in Miles Davis' 1972-75 ensemble, and 2) his production work and songwriting for the likes of Madonna, Mtume, Stephanie Millls, and Phyllis Hyman (often paired with fellow Miles alum James Mtume). 1975's all-instrumental SURVIVAL THEMES finds Reggie seemingly on the move from the former to the latter, with one foot planted in both areas. The extended title track offers a suite of four Lucas/Mtume guitar/percussion duets. The approach has similarities to Miles' challenging AGHARTA/PANGAEA albums. The first three duets are semi-ambient explorations of melodic themes (ala some of the quieter passages on the before-mentioned Miles albums)...it sounds as if Lucas overdubbed a second guitar much of the time. The final "theme" offers a Hendrix-like sonic explosion (at first sounding a bit like Jimi's `Voodoo Chile', then quickly building to a Pete Cosey-like fury) over Mtume's electric percussion washes. This storm is far from quiet.
In contrast, the first three tracks offer a relatively conventional brand of funk-jazz that seems to find a mid-point between Miles' radical mid-70s period and the more radio-friendly music of the likes of Norman Connors...perhaps not as visionary as Herbie Hancock but with more bite than the crossover efforts by the likes of Donald Byrd and George Benson issued during this era. These tracks add drums (Howard King), bass (Michael Henderson, Anthony Jackson), keyboards (Hubert Eaves), and a horn section (on SLEW FOOT) to the core duo of Lucas and Mtume. TENDER YEARS has some mellow axe work by Reggie, while THE BAREFOOT SONG starts out quite smooth, but before you know it considerable heat is generated via extended solos from Lucas (reminds me a bit of Santana, but not a clone) and presumably Henderson (very funky and exploratory at the same time). Recommended particularly to fusion-era fans who'd like to hear Davis' 1970s musical approach backed off to varying degrees from the cutting edge...but not quite into a safety zone.
I really DO derive a lot of pleasure from this recording. This is the one and only indescribably awesome solo offering from guitar master Reggie Lucas. Recorded in July 1975 but not released until 1978 for some unknown reason, "Survival Themes" is 40 minutes of musical bliss that is half funk/jazz/rock fusion (It's not bland, it's just a fusion product of it's time and very well executed in my humble opinion) and half experimental/borderline ambient compositions veering more into the progressive rock realm (no drab noodling, just variations of several..."themes"). Percussion master, Mtume, is present on all seven pieces and injects his trademark Afrocentric vibe throughout. All seven cuts are absolutely amazing but the 9 minute plus "Electric Reflection" is so insanely intense that I couldn't even begin to simultaneously focus on anything else at all whatsoever while it is playing, for it instantaneously transfixes me and compells me to bask in all it's sonic potency throughout the entire duration. I'm sure Jimi was smiling down from the heavens when he first heard this one. I'm so grateful that I was fortunate enough to acquire a near mint copy of this extremely rare and sensational recording. I admonish you to give this album a listen if you haven't already done so. SEEK IT, FIND IT......LIVE IT!!!
Posted by Zen Archer at 2:43:00 AM