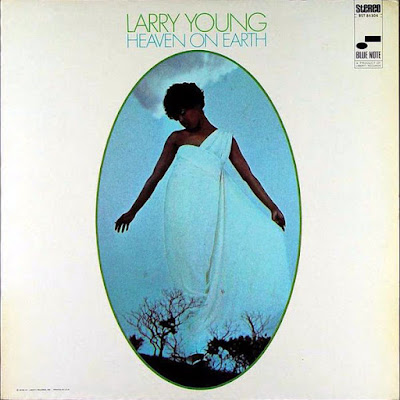 After the brilliant Contrasts album on which Larry Young sounded like he was just about to step into his destiny as a leader in the new jazz fusion style, Larry throws us a curve ball with the inconsistent and sometimes backward looking Heaven on Earth. This isn't a terrible album, but I wouldn't recommend it to people seeking a first look at Larry's incredible B3 playing. Fortunately though, there is enough good on here to be worthwhile to hardcore Young fans like myself.
Larry is known for putting out albums that are stylistically all over the map, in that respect this album takes the cake. The album opener is Infant, a 'fun' soul-jazz number that isn't bad, but Larry had moved past this style years ago. Is this a blatant attempt to score a commercial hit? I love B3 based soul-jazz, but at this point in his career Young is capable of so much more. His playing on this one sounds dumbed down and uninspired.

The next two numbers are much better, in fact Hereafter belongs in the Larry Young hall of fame. This cut is a great mix of avant-African subtle polyrhythmic grooves with laid back spacey psychedelic Hammond sounds and a great guitar solo from George Benson. Although George is best know for his commercial work, when put to the test he can play modern jazz as well as, if not better than any jazz guitarist out there.

Side two opens with Heaven on Earth, another soul-jazz number, only this time Larry and his crew sound a lot more modern, inspired and aggressive. This cut shows Young playing in that forceful semi- minimalist style that he will explore further on Lawrence of Newark, plus there is a series of majestic chord build ups in the middle section that would make any caped prog-rock keyboard player jealous.

Next up Young switches styles again with a slightly off-kilter version of the lounge-jazz classic Call Me. This one may sound like easy listening to many, but Benson and Young throw in enough slightly avant twists to keep it interesting. The album closer is the classic jazz ballad My Funny Valentine, sung by Larry's wife Althea. Once again Young and Benson's accompaniments are unique and inventive, but overall the band plays this one pretty straight. Was this one more shot at a commercial hit?

I like this album, but I would not recommend it to anyone but already committed fans of Larry Young's totally unique musical vision and playing.
Posted by Zen Archer at 1:13:00 AM