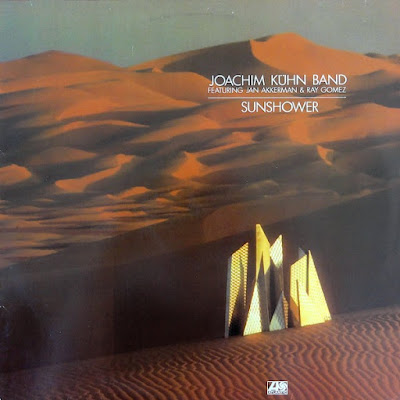 Virtuoso German keyboardist Joachim Kühn is one of the greatest representatives of European Jazz and his illustrious career and numerous recordings are a source of inspiration for any true music lover. Strongly influenced by his older brother Rolf Kühn, an exquisite clarinetist, Joachim started to play Jazz professionally in the 1960s and was one of the founding fathers of the great modern German Jazz scene. In his early days Kühn played mostly modern Free Jazz. But by the 1970s he flirted extensively with Jazz-Rock Fusion recording a series of wonderful albums in that genre first for the legendary MPS label and later for Atlantic. This album finds Kühn in a quintet setting with two guitarists: the brilliant Dutch Jan Akkerman and American Ray Gomez, bassist Tony Newton and drummer Glenn Symmonds. All the music was written by Kühn and it is absolutely stunning, this time more Rock influenced that his previous releases, but as always, performed with passion and exquisite taste by all the musicians. Kühn's extended acoustic piano solos are breathtaking, as are the solos by the guitar players and the entire album is an absolute must to any serious Jazz-Rock Fusion fan, especially those open to the European branch of the genre. Essential stuff!