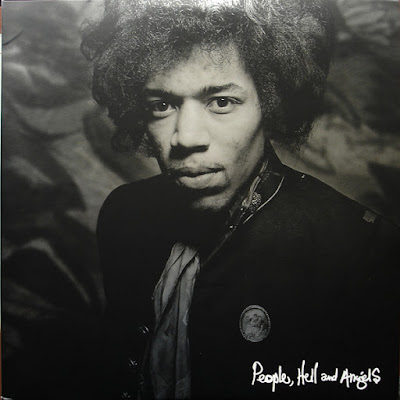 Previously unreleased recordings, the majority drawn from sessions in 1968 and 1969, that Jimi Hendrix and fellow band members (mainly the Band of Gypsys lineup featuring Billy Cox and Buddy Miles) were working on as the follow-up to Electric Ladyland

One quick glance at the cover of the twenty-four page booklet that is included with People, Hell and Angels is worth a thousand words when it comes to Jimi Hendrix. The expressive photograph, shot by Alec Bryne, captures the gifted guitarist in a psychedelic silk shirt down on his kness at the front of the stage, with his inverted snow white Strat pointed at eleven o'clock as he takes the audience for a radical ride of uncharted fretboard insanity. Hendrix, may be on bended knees, but he definitely stands out on the freeze-framed photo, as the straight-looking audience of stone-faced military personnel and suits don't have a clue what is taking place before their very eyes. Further proof that Hendrix was way ahead of the curve until the day he passed away.

The 2013 issue of People, Hell and Angels is the fourth release under the Experience Hendrix deal with the Legacy label. The twelve songs from the vault were initially recorded for the follow-up LP under the working title of First Rays of the New Rising Sun, which would have been the follow-up to Electric Ladyland.

The tracks go back as far as 1968, with J.H. experimenting on several cuts with horns, keyboards and second guitar fills. Hendrix wrote each song, sans the pair of covers (Elmore James' "Bleeding Heart" and "Mojo Man" by Albert Allen and Arthur Allen) that dot People, Hell and Angels. Hendrix is flanked on the get-down movers by the likes of Billy Cox, Buddy Miles, Mitch Mitchell, Larry Lee, Stephen Stills, Lonnie Youngblood and James Booker. No matter who surrounds the electric gypsy, Hendrix is the star of the show as evident from the off with the '69 recording of the stripped down "Earth Blues".

The Hendrix archives run deep to say the least. People, Hell and Angels is a relevant collection of cuts from the legendary guitarist.
Posted by Zen Archer at 12:46:00 AM