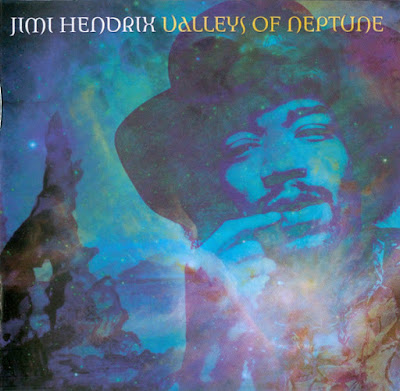 Final studio recordings made by The Jimi Hendrix Experience line-up in 1969 after the "Electric Ladyland" album, previously "unreleased" (the majority have been released in one form or another before, albeit sometimes in inferior quality or different versions)

This album is the closest we've had commercially released of The Jimi Hendrix Experience (Until the excellent West Coast Seattle Boy) than could be thought of as The Beatles Anthology. Or even the closest to the recent Pink Floyd studio boxset. It contains three tracks of Mitch Mitchell and the legend Noel Redding overdubbed in 1987, under the watchful eye of Chas Chandler. It predates "Free As A Bird" by many years and is more satisfying than the final two Beatles singles made from Lennon's gifted tapes. Possible legalities negated as all the personnel involved are no longer on this planet to hear the 'Valleys Of Neptune" as it was released in 2010.
12 tracks and excluding the three tracks not mentioned as in introduced, there is enough material of the Experience that together with some of the highlights of the second disc of "West Coast Seattle Boy" would have made an impressive stop gap and final word on the band had it been compiled and released in 1969 and what an insight into Jimi's perfection the album is. And what an oversight of management my fantasy outtakes album never happened in 1969.

One interesting part of the album for me are the time snaps of Noel Redding in 1969, sounding flippant and bored with yet another play through of a life staple "Hear My Train A'Coming". My preferred version is the BBC version if not his single acoustic filmed. Despite how bored Noel sounds, Hendrix paints a canvas and sounds so relaxed but confident. Compare that to the post-9/70 Redding on the final track "Crying Blue Rain". A snapshot of Jimi recorded in London self produced that in June the 5th, Noel and Mitch added their parts that not just pick up from where they left off with the slow blues, they keep up and follow Jimi as he has an instrumental freakout of chord sequences. Leaving the album and listener left alone in the stratosphere to descend back to your lives.

Although some material was reworked by the driven Jimi, the fact that Ezy Ryder got the riff means we were robbed of "Lullaby For The Summer" being associated with the greatest way the band could have bowed out of.

It sounds great listened to in full on these bright warm nights, the studio take of Red House is better than the version on the US Are You Experienced?. But it sounds more lived in. You can hear the fact Hendrix wanted to get the sound bigger. You can hear the band having everything they could possibly do just give expert performances that make the wrong notes and off beats hard to notice at first.

As excellent the recent live CDs of Hendrix have been, this studio album is as essential as First Rays Of The New Rising Sun and even Axis : Bold As Love. (Despite it being recorded after Electric Ladyland). When he lets the guitar do the taking there really is no other. Stripped away from the endless retakes and attempts intended to be optimum, Jimi's messages still sound like they could have been made today.
Posted by Zen Archer at 12:13:00 AM