Jimi Hendrix
2005
Live At The Isle Of Fehmarn 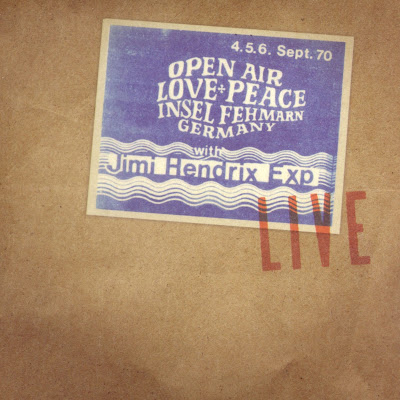 Note: Recorded at the Love + Peace Festival, Isle of Fehmarn, September 6, 1970.
Jimi Hendrix's final (Actually 2nd to last if you count the jam with WAR the night before his death) live performance. He died 12 days later

Originally slated to perform on September 5th, The Experience’s appearance at the festival was delayed by frequent rain storms that plagued the previous days shows. Having just completed a series of six concerts in six days including headlining shows at both the Isle Of Wight (August 30) and Berlin (September 4), the extra day of rest would serve the group well.

By the time The Experience took to the stage on September 6, audience tensions were guarded following a series of fights between German bikers, that had escalated in ferocity, and included the festival Box Office being robbed at gun point and Jimi Hendrix’s own road manager, Gerry Stickells being attacked. Depsite these problems, The Experience delivered an enthusiastic hour-plus performance which saw Jimi lead the trio through a series of songs encompassing all of the different periods of the group’s existence.

Jimi’s Isle Of Fehmarn performance has been widely bootlegged over the last 35 years yet it was never professionally recorded. Amateur recordings made from the audience by fans have served as the only known documentation of this historic concert until now. As the eighth entry in this popular ‘bootleg’ series, Dagger presents a newly discovered recording made by the festival’s promoters. Unbeknownst to Hendrix, the promoters captured the group’s entire performance by feeding two overhead stage microphones into a consumer grade Revox reel-to-reel tape machine located off to the side of the stage. The resulting document, rough hewn and unmixed, is clear and not unlike the amateur
audience recording featured on the initial Dagger offering Live At The Oakland Coliseum.

Anyone who has read the events of Hendrix last concert at the Isle Of Fehmarn knows that he played under extremely dire conditions. A raging gale blowing in from the Baltic Sea delayed this show one day after he was to appear, totally pissing off the audience and putting everyone in a horrible mood witnessed by the screams of "Go Home" scattered among the booing. Playing in intermittent driving rain, constant wind, and fighting among a wet,stoned out crowd also being hassled by German Bikers, Jimi still shows flashes of brilliance but all in all you can sense he wanted to get the hell out of there. Sound-wise, this is a bootleg. Drums are hard to hear, hardly any bass drum or bottom end, mostly high register guitar and tinny vocals. The band is in good form, however, and if you listen close, before they start "Killing Floor," Hendrix does a quick pass at "Louie, Louie" which is kind of funny. The songs have the standards like "Hey Joe," Foxy," "Voodoo Child, and "Purple Haze," but newer material like "Freedom," "Ezy Ryder," and "Hey Baby" make it interesting. Can't give this a 5 star rating mostly because of the sound and also Hendrix was obviously fighting an out of tune guitar. Playing in a storm will certainly affect your guitar strings! But...it's the last time the Experience ever played in concert. If you ever get a chance, watch some of the 8MM footage from this concert and you will understand what I mean. The festival site was an absolute mess. Such a pity it had to end under these hellish conditions. Certainly the opposite end of Woodstock and he deserved to go out on a much brighter note.

Along with an unfriendly crowd the sound mix is terrible; the drums sound poorly and are difficult to make out, the bass is little more than toneless background thumping, and Jimi's voice is weak and lost in all the noise. So, you may ask, why the 4 stars? With all the faults of this album, the one thing it has going for it is that Jimi's playing is in top form, and his guitar volume is pushed out in front of all the other clutter. More than nearly every other live Jimi Hendrix album, this one clearly exposes Jimi's abilities for all to awe. If this album consisted of only Jimi and his guitar, and all the other instruments and crowd noise were eliminated, this album would easily rate 5 STARS. If you're a guitar player and want to hear the Master perform feats the envy of all other guitar players, this is the album to own. The sound quality is so poor it's tough to listen, but when you focus on only the guitar it takes you to a place beyond where mortals dwell.
Posted by Zen Archer at 9:39:00 PM