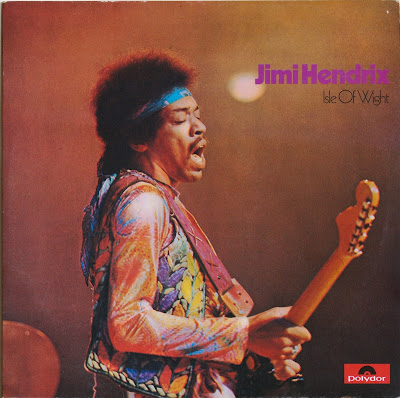 Released: November 1971
Recorded: August 30, 1970 at the Isle of Wight Festival in England


Isle of Wight was a posthumous live album by Jimi Hendrix, released in November 1971 by Polydor. The album documents Hendrix's performance at the 1970 Isle of Wight Festival on August 30, 1970; his last performance in England before his death in September. Although the cover photo is from Berlin.

Isle of Wight contains just part of the concert. The entire performance was released on the 2002 album Blue Wild Angel: Live at the Isle of Wight.

The Isle Of Wight concert was one of the last concerts Jimi Hendrix gave for his tragic death. While the show's duration was about 1,5 hour this record doesn't reach even the 40 minutes. The choice of songs for this record is somewhat peculiar, because there are just a few 'hits' on this record, while there were many in the Isle of Wight concert. I do own a compilation of liverecordings of this guitar master with other tracks of the Isle of Wight concert, which did not make this record.
Because of the decision of leaving the hit's of this record this live record mainly exist of new material! So, what about the quality of these songs, which were never released on studio record? The opening track "Midnight Lightning" is an acidic (the record as a whole is Jimi Hendrix at it's most acidic sounding ever!) bluesrock song leaning on the old blues traditions, but acidic.

Foxy Lady is a welknown song and the performance is great. Jimi plays what comes to mind which lead to a lot of guitar experimentation and improvised solo's. "Lover man" is another great track. Acidic hard- rock with a lead guitar accompany to Jimi's vocals. This is quiet a short track with many good ideas carried out. Also "Freedom" is a great acidic hardrock track you should not wanna miss if you're a Hendrix fan.

The live version of "All Along the Watchtower" is near perfect. Jimi's vocals are great and his guitarplay is very tight on this song. This song is more convincing then the studio version, because of the boost of energy released on it. This version has a "Wow! factor"."In from the storm" begins with a drum solo, which duration is perfect: before it get's boring it is over. Another great track.

Critic's have banned this record for having no hit's on it and because of it's short duration. But if we look at the material on it, I cannot find a weak track on this record and some great new material. There are no experimental session which are stretched: this record is full of ideas and leaves you behind with the feeling: I wan't more! This is only the case with really good records!

Some people in documentaries I've seen thought that Jimi might have gone to a more jazzier direction if he hadn't die at young age. This record however shows Hendrix more acidic in sound then ever: a real thick guitar sound, comparable with the debut of Guru Guru. After the Band of Gypsies people might not have expected such a sound! The production is great: while the guitar is heavy and thick also the bass and drums are constantly distinquishable. The best live record of Jimi Hendrix released in the 70's!