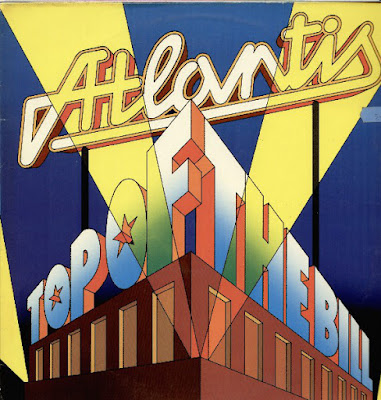 After a few live performances in Germany, the first LP was produced in the studios of Island Records in London, which was especially popular in the USA, where Rumpf's blues-oriented voice was appreciated. Diez and Cress left the band after the recordings. For a four-week tour of England with Procol Harum and Traffic George Meier came as a guitarist and Udo Lindenberg as a drummer to Atlantis. These were replaced after the tour by Dieter Bornschlegel (formerly in the band Traumtorte) and Ringo Funk (formerly at Jeronimo), with which then the second LP It's Getting Better (1973) was recorded.

During another four-week tour of England, Jean-Jacques Kravetz left the band to join the band Randy Pie. Reiner Schnelle jumped in for him at short notice. At the end of 1973, the band ranked among the three most popular groups of the readership of the then important journal Musikmarkt.

Already in the summer of 1974, the next personnel change took place. For Reiner Schelle came the British keyboardist Adrian Askew, for Dieter Bornschlegel came guitarist Alex Conti from the band Curly Curve. In this lineup, the third album Ooh, Baby was recorded in 1974.

In 1975, a tour through the US took place (usually as an opening act of Lynyrd Skynyrd), after which the band separated from Alex Conti, for now again the former guitarist Frank Diez and for the first time a second guitarist, Rainer Marz (formerly Ringo radio at Jeronimo), joined the group. The subsequent fourth LP Get on Board (1975) is clearly marked by hard rock American style, but was not a commercial success.

In January 1976, Hull and Schott announced the dissolution of the band. However, there were until March 1976 still some more studio recordings that were released on the album Top of the Bill.