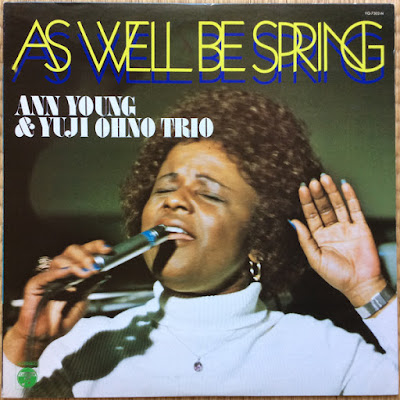 Yuji Ohno (Ono Yuji , born 30 May 1941 in Atami, Shizuoka, Japan) is a Japanese jazz musician. Ohno is principally known for his musical scoring of Japanese anime television series, of which Lupin III, specifically the 1977 series Shin Rupan Sansei and the feature film The Castle of Cagliostro are his most well known works. Later anime series scored by Ohno include Shingu: Secret of the Stellar Wars, the 1979 Toei series Captain Future (known as Capitaine Flam in France) and the 1982 series Space Adventure Cobra. He has composed scores for live-action films, namely Toei's tokusatsu series Seiun Kamen Machineman

An unknown and beautiful american jazz voice, supported by the Yuji Ohno Trio featuring Yoshio Ikeda & Kazuyoshi Okayama. Her career has mainly developed in Japan, where she was former vocalist for pianist Masao Yagi. As Well Be Spring consists of a selection based on various popular jazz standards & cover songs from the forties and the fifties, including Old Devil Moon (from the 1958 notable version performed by Chet Baker), Speak Low, There Is No Greater Love (sung by Billie Holliday in 1947) or I Only Have Eyes For You (written for the movie "Dames" in 1934, best known version from Peggy Lee). All tracks arranged by Yuji Ohno.
Posted by Zen Archer at 7:25:00 PM