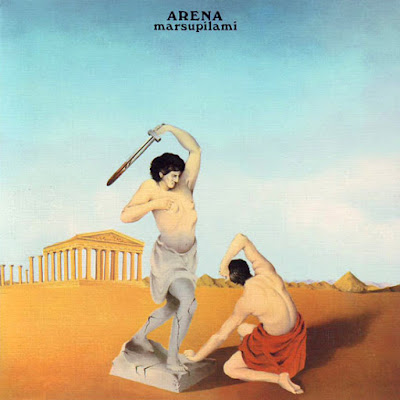 Second album by MARSUPILAMI was an ambitious concept one about the brutality of the ancient Roman culture involving not less than eight musicians. BTW it has been produced by Peter Bardens whose band CAMEL was still waiting for their big success at that time. On ARENA the band had refined and further improved their sound by adding Mellotron, sax, electric piano, more woodwinds and percussion. But central instrument is still the Hammond played incredibly skillful by Leary Hasson covering its full potential spectre.

Apart of the involvement of more instruments the most striking difference to their debut is that the compositions on here are much less catchy and very intricate with a rather strong jazz influence at times almost towards RIO. Thus this one needs definitively a few spins to get into it. Prelude to the Arena opens the albums with a fluttery organ sound followed by narrative vocals by Fred Hasson leading to a quite heavy part with screaming, furious drumming and guitar but as well more quiet parts with e-piano, Mellotron or flute. First track is already a highlight! Second song Peace of Rome is as well a very versatile one varying between mellow, beautiful sections and more savage ones. Thereafter the very intricate epic songThe Arena is following with 13 minutes of timing and including awesome solos on Hammond and flute. Initially the track has a very oriental inspired sound developing more into a Canterbury vein. Time Shadow is the one where the sax comes into play and probably the best one with an incredibly intricate interplay between flute, sax and Hammond. It starts with psychedelic sounding spoken vocals then a dramatic intro with organ and drums which segues into a rather quiet part with flute, organ and short amazing solo on Harmonica (!) before vocals come in. This track has a very strong jazzy Canterbury touch not mainly due to the sax playing. Really an absolute highlight! The initial part of The Spring is the weirdest and oddest one of the album with a strange and disharmonic Hammond sound and a savage free jazz jamming, then it segues into a very pleasant theme on flute followed by a solo by Harmonica and the song switches more into a psychedelic folksy vein with mesmerizing vocals not unlike the band Quintessence. The final part is a reprise of the flute theme with tubular bells added on.

This concept album about the drama of the gladiator's arena during the Roman Empire is the second of two intriguing albums Marupilami recorded in the early 70s. The pair of proto-prog albums are of almost equal strength, and both are worth investigating. While the first album wins marks for being such a unique work and sounding like very little like anything that came before it, Arena's greater variety in terms of instrumentation probably tips the scale in its favour.
Prelude To the Arena: The Undertones Of Violence In A Drifting Generation begins with some threatening noises from lead vocalist Fred Hasson over some frenzied attacks but soon settles down into a truly beautiful melancholic passage with acoustic guitar, flute and mellotron. Fast-paced jazzy vocals and a great electric piano solo from Leary Hasson take this piece home

The second track Peace Of Rome: They Manufactured Death To Keep The Peace, has a nice, dark mid-section led of course by organ and flute, before a searing special from Dave Laverock (actually the best guitar solo I've heard from him) takes the music to a new level. Marsupillami's longest song The Arena (The Fighting, The Killing, The Mother Of Fornication) doesn't start off so well but after a couple of minutes becomes an outstanding organ-dominated psychedelic improvisation, drawing heavily from Eastern themes, with drummer Mike Fouracre also making his presence felt. This track loses momentum, but again resolves itself towards the end, even if the very last notes of the song seem unbearably harsh

Time Shadows (Lay Low The Past, The Future Brings Hope) is a sombre, almost eerie affair, with Jessica Stanley Clarke's flute and Leary Harsson's organ doing a good job in building up an atmosphere (Fred Hasson's harmonica works rather less well). It eventually breaks into jazzy flute driven prog. There's some nice piano playing, and another pleasing surprise when a saxophone kicks in to good effect. Laverock's jazz guitar solo is also of note, while the ferentic stomping conclusion to the piece ensures that a good time is had by all.

The closer Spring is another strange one With a pastoral acoustic guitar/organ/flute opening giving way to a veritable cacophany of sound for more than a minute before a beautiful almost soft-rock passage comes into play. This portion is rather remiscent of Camel's tamest moments which is perhaps no surprise given that future Camel stalwart Peter Bardens produced this album. There's a harmonica solo, a powerful jam with an eerie conclusion and a restatement of the soft-rock passage before the show shuts down.

By and large Arena is an album that doesn't really follow any precedents, which is exactly what makes it, to my mind, so darned fresh.