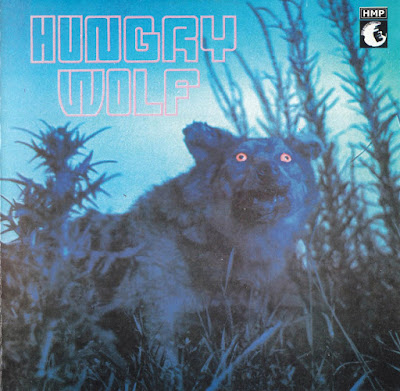 Hungry Wolf was not so much a rock band, but a one off project by some of England's studio musicians put together by Alan Hawkshaw and Alan Parker, which makes me wonder if this album qualifies in the category of library music. It is also unclear how one is to distinguish this from the bands Rumpelstiltskin and Ugly Custard as this is essentially the same line up as both bands and the song "Custard's Last Stand" appears here as well as the Ugly Custard LP. This is an interesting album as these are all fantastic musicians, yet there is something strangely contrived about it as well. If you like this, check out CCS, Rumpelstiltskin or other recordings by Alan Hawkshaw. Nothing profound or earth shattering here. It's one of those albums to guarantee lots of cheezy fun.

Great album from 1970 by this short lived UK progressive rock band featuring Alan Parker, who played with Blue Mink, David Bowie, CCS, Elton John, Gerry Rafferty, and Alan Hawkshaw, who played with Cliff Richard, The Shadows, Madeline Bell, Donovan, and Family Dogg. In a similar vein to Blue Phantom, Ugly Custard, and other "progsploitation" groups it's a pleasing selection of jazzy mainly instrumental progressive rock with lots of keyboards, ripping guitar and big band backing. A big shiny funky sound with weird experimental flashes. There are many musical influences here. Shades of the jazz-funk sound of BS&T, and CCS can be heard, and many psychedelic prog. rock touches also influence the album. Altogether, the sometimes experimental sound works wonderfully well. The album featured vocals by Peter Lee Stirling, aka Daniel Boone, who had a couple of pop hits in the early seventies. The musicians included future members of Rumplestiltskin who recorded one great s/t blues rock album in 1970, and well worth checking out. Most of the nusic on the album is original, inventive, and ahead of it's time. It doesn't sound like an album recorded nearly 40 tears ago. An exceptional, and unusual album from 1970!
Posted by Zen Archer at 5:15:00 PM