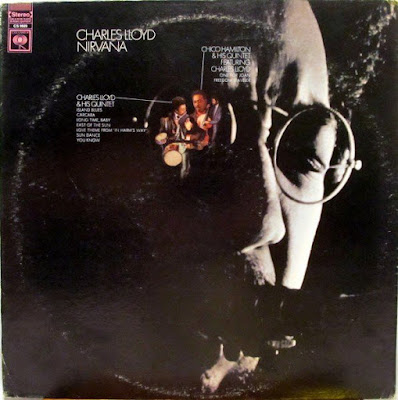 Nirvana is an unusual compilation that was rush-released in 1968 after Lloyd’s quartet with pianist Keith Jarrett and drummer Jack DeJohnette transcended typical jazz popularity with emerging rock audiences to become one of the single most popular jazz groups of its day. Aside from producing a plethora of excellent music for the Atlantic label in the late 1960s, this quartet remarkably never condescended to demean their creativity with any sort of crossover appeal like electrics, boogaloo rhythms or mind-numbing 4/4 ostinati.

Strange as it is, Nirvana is pretty darned good and more guitar driven than anything else Lloyd would later become known for doing. Columbia took eight unreleased tunes Lloyd had recorded for the label – many of which were outtakes from the brilliant Of Course, Of Course (Columbia, 1965) album with Lloyd, guitarist Gabor Szabo, bassist Ron Carter and drummer Tony Williams – and combined them with “One For Joan” and “Freedom Traveler,” the first two Lloyd compositions from the Chico Hamilton album Drumfusion (Columbia, 1962).

It wasn’t exactly what the group’s fans wanted to hear and the album was soon forgotten and deleted. Many years later, the spectacularly perfect Of Course, Of Course was reissued on CD (Mosaic, 2006), with three of the most obvious Lloyd-Szabo-Carter-Williams titles from Nirvana included as bonus cuts (“East of the Sun,” “Island Blues” and “Sun Dance”).
Posted by Zen Archer at 6:47:00 PM