The Sounds Of Liberation
1972
New Horizons 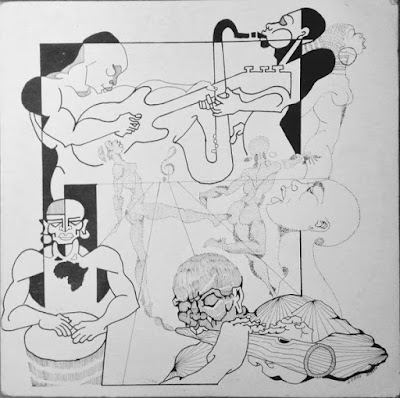 In the years following saxophonist John Coltrane's death and the related dearth of opportunities to perform and record the New Music stateside, a significant body of musicians relocated to Europe, to ply their art in a more receptive atmosphere. Reedman Byard Lancaster was one of the second wave of American free jazz musicians to relocate to Paris in the late 1960s, recording and gigging as part of drummer Sunny Murray's Acoustical Swing Unit and leading his own ensembles with musicians like pianist Francois Tusques, conguero Keino Speller and Congolese guitarist Francois Nyombo. But Lancaster always maintained a connection to his hometown of Philadelphia, as well as a staunch commitment to playing music that was both avant-garde and decidedly "for the people"—hence his oft-repeated tagline "From A Love Supreme to the Sex Machine."

Lancaster and vibraphonist Khan Jamal were the artists primarily represented on the Philly free-soul label Dogtown, which released three titles before disappearing into the record collecting ether. The Sounds of Liberation was a collective ostensibly creditable to both Jamal and Lancaster; joining the proceedings are bassist Billy Mills, guitarist Monnette Sudler, drummer Dwight James and percussionists Rashid Salim and Omar Hill. Sudler, Mills and James also appeared on Jamal's excellent psychedelic free-funk fantasia, Drum Dance to the Motherland (Dogtown, 1972, reissued on Eremite). Sounds of Liberation's sole LP, New Horizons, is the rarest of the Dogtown series; the only copies to appear for sale in recent years were a battered vinyl with no cover and a worn cover minus the wax, so this reissue is lent an extra sense of gravitas. The band appeared on the scene long enough to play opposite Kool and the Gang at the 1974 Miss Black America pageant, before petering out by the late 1970s.

Lancaster's alternately syrupy and feral alto saxophone is at its best when supported by a tight ensemble situation, composed or otherwise—even while lifted up by Murray's multi-directional sound carpet, his playing in the more structured units of pianist Burton Greene and trumpeter Bill Dixon is utterly sublime. The Sounds of Liberation is a decidedly loose outfit, but reliant on massive and relentless vamps that at their most open offer the kind of support that gives compulsion to the squall. Abraham Howard, Jr.'s "Happy Tuesday" opens the set, a 20-minute scorcher that encapsulates what this group is all about. Following a lilting and intense conga solo from Salim, the rhythm section erupts in a variety of shades—electric bass, drums and chekere holding down a knotty foot-tap as Sudler colors the scene with flinty electric murk. Digging into the horn's bowels and coming up with shrill, barking tongue-speak as though captivated by the Holy Spirit, it's hard to imagine Lancaster's approach being the stuff of a funk ensemble, but that's where the Sounds of Liberation come into play.

A multiplicity of rhythms cascade and bounce off one another, shaken, pounded, thrown and snaking their way through the airwaves. Bass, guitar and three percussionists give this music a hell of a lot of drive. Jamal follows suit with glassy, rattling architecture; his solo is short, but shifts moods from vibrato-heavy plasticity to jet-setting funk, to blinding Afro-psychedelic waterfalls. Sudler rises from the deep with Sonny Sharrock-like droning strums and mild, cottony feedback before settling into plaintive, wiry blues that stop the ear with sheer poetics. Alto and vibes return with the front line wailing its way out over a vamp, which has held fast throughout.

It's hard to believe that the original side as programmed could follow such a tour-de-force with anything, but it does in the smooth, up-tempo "New Horizons II." The tune's arrangement could easily fit as a plugged-in variant on the vibraphonist Bobby Hutcherson-saxophonist Harold Land aesthetic. Where works like Drum Dance to the Motherland or Lancaster's Live at Macalester College (Dogtown, 1972, also reissued by Porter) are charmingly rough-hewn, the Sounds of Liberation exhibit an undeniable slickness, which isn't a bad thing. Warm vibraphone and saccharine alto, coupled with a just-left-of-hyperactive backbeat collectively make for an uplifting slice of soul jazz (though the rhythm breakdown midway through is a little abrupt and bent). It's easy to imagine tunes like "Billie One" and "New Life" being the two sides of a 45rpm single—each is under three minutes and features hard-funk drums backing concise solos by Sudler and Jamal, with a particularly nice drum break on the latter.

A longer and slightly rawer take of "New Horizons," here appended "I" (Dogtown releases were nothing if not inconsistent in their credits), is preceded by the lone free-form piece on the date, "We'll Tell You Later," which provides an example of the more unhinged side of these musicians' art. A slashing drum workout opens the piece, but it's Lancaster's unaccompanied saxophone that offers the most intrigue—his lines jump from piquant bubbling and soft caresses to fiery Albert Ayler-esque screams in a few measures. Sudler pecks at Lancaster by sliding grungy shards around his blasts, as bass and percussion fold in to create a dense, otherworldly lather. A shouted count-off comes from nowhere, and the group launches into a damaged funk-rock jam with Lancaster's R&B honking out front. Clearly, New Horizons wouldn't have been a Dogtown release without some level of indescribable weirdness. The holy grail(s) of record collecting rarely live up to the hype that surrounds their existence, but the Sounds of Liberation go well beyond anything that could have been hoped for. This is an absolutely wonderful slice of border-trouncing improvised music from the Philly jazz heyday.