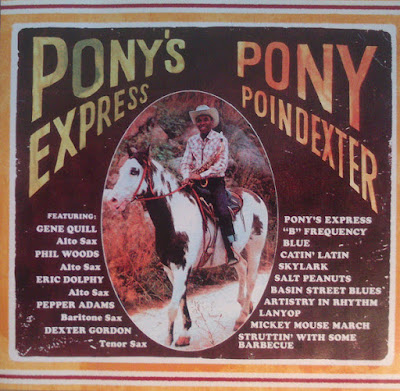 Pony Poindexter was a sporadically recorded bop saxophonist who played on sessions by Lambert, Hendricks and Ross as well as Wes Montgomery; his long unavailable 1962 debut as a leader, originally on Epic, finally was reissued as a Koch CD in 2001. With arrangements by Gene Kee, Poindexter leads several all-star ensembles, which include Phil Woods, Gene Quill, Sonny Red, Eric Dolphy, Dexter Gordon, Clifford Jordan, Jimmy Heath, Sal Nistico, Billy Mitchell, and Pepper Adams. The rhythm sections are also first rate: either Gildo Mahones or Tommy Flanagan play piano, with Ron Carter or Bill Yancey on bass, and Charli Persip or Elvin Jones on drums. Poindexter is a convincing ballad player with the rich reed section backing him on "Skylark," while he trades choruses with Gordon's big-toned tenor on a snappy and decidedly nontraditional take of "Struttin' With Some Barbecue." His originals include the smoking opener "Catin' Latin," with the leader on soprano sax (and almost getting buried by the backing saxophone section at times), the brisk blues "Pony's Express," and the loping blues "Lanyop," which also features a typically daredevil alto solo by Dolphy. Sadly an alternate take of "Lanyop," which appeared on the LP anthology Almost Forgotten, was not licensed for this Koch CD reissue and omitted. It's a shame that Pony Poindexter didn't get many more opportunities to record as a leader, as this release demonstrates his considerable promise.
Posted by Zen Archer at 4:14:00 PM