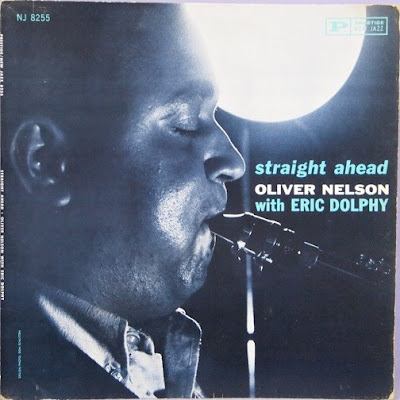 Oliver Nelson's fame as an arranger often overshadows his work as a leader, which is a shame considering the quality of his albums. A classic hard-bop date from 1961, STRAIGHT AHEAD displays the best of Nelson's skills--his writing (he composed five of the six numbers here), his fine command of the sax (his bright, open tone and clean, lyrical approach), and his excellent taste in personnel. The latter is of particular note here. In addition to Roy Haynes (drums), George Duvivier (bass), and Richard Wyands (piano), the enormously talented Eric Dolphy is also on board, posing a triple threat on alto saxophone, bass clarinet, and flute. Nelson bravely goes toe to toe with Dolphy, and while Nelson's playing is smart and accomplished, he is buried beneath the avalanche of Dolphy's invention (the multi-instrumentalist's knotty, springy lines, always full of surprise and humor, are nearly impossible to top). Everyone gets to stretch out on Milt Jackson's "Ralph's New Blues," Nelson's lilting "Images," and the frantic title cut, among others, making STRAIGHT AHEAD a magnificent showcase for all of these remarkably talented musicians.

Recorded less than a month after his most popular album, The Blues and the Abstract Truth, Oliver Nelson's follow-up, the inaccurately titled Straight Ahead, is probably a more enjoyable listen, though it is less varied. Nelson plays with five musicians here as opposed to seven on Abstract Truth, which (perhaps intentionally) limits Nelson's options as an arranger. Most of the focus is on Nelson and sideman extraordinaire Eric Dolphy, who deliver the bulk of the solos. Nelson's sturdy solos set up the pyrotechnical Dolphy, whose flute, bass clarinet, and alto sax solos assure that this album is anything but "straight ahead" (even if tracks like "Six and Four" and "Mama Lou" are fairly conventional, compositionally). Though Straight Ahead may not be as sonically panoramic as The Blues and the Abstract Truth, it is a record that hums along and really purrs, especially on Side Two (as "Ralph's New Blues" and "Straight Ahead" are the album's best cuts). Definitely recommended for all fans of jazz, especially fans of Eric Dolphy.

Contrast is everything. Think of food for example: A big salty hunk of mature cheese is nicely offset by a couple of sweet grapes. Gastronomes would never dream of eating a rich foie-gras without the accompaniment of the honeyed sweetness of a glass of Sauternes.

The same is true with music; a whole album of fast-paced music quickly becomes draining. Likewise, an hour of chilled-out dub can send you to sleep. The saxophonist and composer Oliver Nelson was obviously acutely aware of this when choosing his musical sparring partners. Nelson's decision to share the frontline on three albums with the multi-instrumentalist Eric Dolphy is often described as brave. I believe that Nelson knew exactly what he was doing. Dolphy, a hero of the avant-garde, has a style so diametrically opposed to Oliver Nelson’s that the two just can’t help but complement each other.

This synergy is beautifully demonstrated on the 1961 recording Straight Ahead. Both soloists play a number of instruments, with Nelson on alto/tenor saxophone and clarinet and Dolphy on bass clarinet, alto saxophone and flute. Oliver Nelson was a jazz composer par excellence, and this album does not disappoint. It contains a number of memorable themes, such as “Six and Four,” “Mama Lou” and “Straight Ahead.” Best of all: the soloing. The high-speed elasticity of Dolphy’s runs contrast perfectly with the pure, soaring tone of Nelson. The two horn players spark each other and generate music of genuine intensity.

It is worth noting that Oliver Nelson and Eric Dolphy played together on a number of other albums, the highlight of which must be the classic chamber-jazz of The Blues and the Abstract Truth. Pass the grapes...
Posted by Zen Archer at 2:30:00 AM