Oliver Nelson - 1961 - The Blues and the Abstract Truth

Oliver Nelson
1961
The Blues and the Abstract Truth 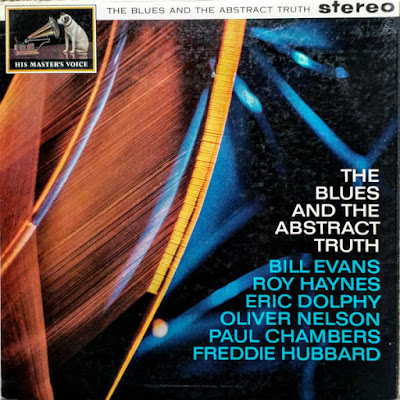 
Sort of a State of the Jazz Union Address for 1961 - along with My Favorite Things, Africa / Brass, Olé Coltrane (Coltrane was a real mover and shaker, after all), and Mosaic, it gives you a great idea of just what was happening in the genre in the early '60s, where the shift towards radical expressionism the genre would undertake later was just starting to take hold. Eric Dolphy and Max Roach threw down the gauntlet with their avant-garde manifestos - the playful Free Jazz and the intense We Insist! Max Roach's Freedom Now Suite, respectively, but what Trane, Blakey, and Nelson were doing was channeling this fiery, more avant-garde approach in a manner more acceptable to the average jazz fan of the time - easing people into the revolution, as it were.

Me? I love both approaches. Whether it was the highly experimental approaches to the genre that the likes of Coleman and Roach were already on and Coltrane was moving towards pretty rapidly (Africa / Brass is some of the most intense early '60s jazz you're gonna get), or the traditional but forward-thinking attitude of the Blakeys and Nelsons of the world, this was a fruitful period for the genre. Now, as a dyed in the wool fan of free, avant-garde, and generally experimental jazz, I will admit that I do lean towards the more exploratory styling of the Coltranes, Roaches, and Colemans of this world than the more traditional ones of guys like Oliver Nelson here, but the thing about transitional works is that they tend to be pretty rich.

Because make no mistake - Nelson had some avant-garde ideas here. The "Abstract Truth" part of the title was no accident - it is not quite as abstract as The Shape of Jazz to Come, but on some songs here, the band (which hey whaddayaknow includes a guy named Eric Dolphy who might be of interest to you avant-garde jazz fans in the audience) messes around with the rules. Or breaks every single one of them, in the case of the atonal "Hoe-Down." That one basically tells the idea of jazz being pleasant dinner party music to fuck off and is a lot more interesting as a result, while "Cascades" flips back and forth between traditional hard bop (in the solos) and tossing a mind-bogglingly fast group of intricately layered notes that bounce from perfect harmony to clashing and crashing up against each other the way Dolphy and Coltrane later would during their landmark Village Vanguard dates. I am sorry I keep bringing Coltrane into a review that has nothing to do with him, but his influence seems to loom large over the proceedings here - "Cascades" in particular has a lot in common with Giant Steps as far as its melody goes, the notes just tumbling out.

But in other moments, this is blues, plain and simple. And you know? He does the blues as well as he does the abstract truth. Take "Stolen Moments," far and away the most famous song on the album and one of the best jazz songs of the '60s. It is centered around an unforgettable melody, which is in turn focused on those same basic rules of harmony that Kind of Blue laid out. And it makes a pretty strong case for something that had quickly become a well-established jazz tradition despite only being two years old at the time - "Stolen Moments" is the masterpiece of the album, and it can definitely go toe to toe with anything off Kind of Blue except "Flamenco Sketches." It is seriously that good, people. Along with "The Sidewinder," "So What," and "Moanin'," it is the sort of jazz song that knows of nothing but swag, this kick-ass embodiment of smoky cool, with Freddie Hubbard leading the band down the road to Pimptopia. "Yearnin'" cannot hope to beat "Stolen Moments" at its own game, but it has that same "walking around town like you own the place" atmosphere, and on top of that, an interesting solo from Dolph where he pushes this sort of thing as far into experimental territory as it had ever been pushed.

The last two songs present odd cases, not fitting well into either category. "Butch and Butch" might seem like traditional bop at first, but unless you're listening to Blakey - and honestly, you have no excuse NOT to be listening to Blakey - you probably are not going to find anyone playing it this hard, and you are certainly not going to hear the kind of badass atonal wackiness Dolphy threw into his solo on any of Blakey's records - I cannot think of any saxophonist who looked at the instrument quite like Dolphy did, and since my attempts to explain it would probably prove fruitless, I am going to toss recommendations for Out to Lunch and Iron Man your way instead. "Teenie's Blues," the closer, is just as odd - I cannot help but think of Thelonious Monk stricken by a bad case of paranoia when I hear that melody, and as you would expect, Dolphy's solo is jarring and delightful, playing a fun contrast to Nelson's smoothness. Imagine if David Byrne and Marvin Gaye sang a duet. And is it just me, or is there something slightly wrong with the rhythm?

So this is an interesting case, and given the radically different directions Hubbard, Dolphy, and Bill Evans (Oliver Nelson himself did not make any other albums anywhere near as famous as this one afterwards) would pursue as time went on - Evans' classical influence, which you do not really hear here; Dolphy's avant-garde leanings and Freddie Hubbard's gutbucket, funky approach to it, which you certainly do - I imagine these sessions were rather tense. But they made the best of it, and they gave their listeners a great example of what happens when a bunch of musicians from radically different backgrounds (hell, Paul Chambers played just about every type of jazz, didn't he?) get together in the midst of the jazz revolution and make something that both the traditionalists and the revolutionaries can enjoy. Basically, if you enjoy any sort of jazz, this will appeal to you - even big band purists will probably be able to appreciate the harmonies of "Stolen Moments."
Posted by Zen Archer at 3:13:00 AM