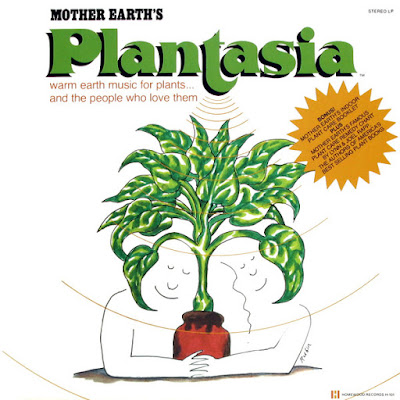 01. Plantasia
02. Symphony For a Spider Plant
03. Babys' Tears Blues
04. Ode to an African Violet
05. Concerto For Philodendron & Pothos
06. Rhapsody in Green
07. Swinging Spathipyllums
08. You Don't Have to Walk a Begonia
09. A Mellow Mood for Maidenhair
10. Music to Soothe the Savage Snake Plant

Mort Garson does a 180 from the eerie Ataraxia, since this time he does a Plant Moog album, an album for plants, music that's supposed to be soothing for plants, so don't expect Ataraxia or Lucifer. In fact the music, for the most part borders on proto-New Age, and for my tastes, it's not always to my liking. The album does best when steering away from the early New Age template, to be honest it still sounds like Mort Garson we all know and love. Unlike his major label albums, Mother Earth's Plantasia was only available at furniture outlets (in Southern California, apparently) when you purchase a Simmons Mattress. I can't imagine too many Simmons buyers playing it, I'm sure many of them had fairly mainstream music tastes who likely had a few Linda Ronstadt, Carly Simon, Eagles and James Taylor records in their collection at the time, with electronic music a bit out of their league. Regardless, not my favorite from him, but still worth having if you enjoyed his other electronic stuff. This appears to be Mort Garson's last exploration into electronic music, by 1976 his style was becoming outdated (Jean Michel Jarre was just appearing with the release of Oxygene that December that changed the world of electronic music, one of more mainstream acceptance). I don't know if this album will calm plants, but I'm sure it may calm many listeners.

The title track opens with a set of very soft ambient synthesizer (or, should I say, photosynthesizer hehehehe) arpeggi with a very swift whistle-like sound generator. Eventually a bass synth and another lead enter, as well as a lone MIDI trumpet. It reminds me of the Vangelis work for Blade Runner. Calm and soothing track, which is what I assume will be found throughout the entirety of the album.

"Symphony for a spider plant" has these pretty glass-like arpeggiators with more sine-wave synths. This one has an even more outer space vibe because of the arpeggi. I like the little section switch that Garson uses at 1:40. The main theme makes a reoccurrence at the end.

"Baby's Tears Blues" continues this 90's ringtone series with a slightly more pro-active bass synth. I usually hate strings generated from keyboards but they sound pretty cool around 0:50. Just thought of one more thing it reminds me off. Back in school we used to watch these old soviet movies on biology and the soundtracks to those were incredibly similar. Especially the little arpeggi swirls in between the sections.

"Ode To An African Violet" has an element of electronic percussion noticeable and sounds like early Aphex-lite. It is very simple with chill background percussion and maximum 2-3 synths playing over. I bet flowers would love this shit. I mean what flowers would listen to if not this, right? Either way, the usage of the little swirl transitions is used here too. They sound like bells. Plus there is this one synth that sounds so high-pitched at the end .

"Concerto for Philodendron..." has very pretty synth sections at 0:45 sec. The synths on this album have a very intergalactic and warm flavor to it. If the plants were in space, they would be loving this even more. This particular track reminds me of Pet Shop Boys for some reason.

"Rhapsody In Green" is very relaxing, even more so compared to the previous tracks. It tried to keep the synths at a certain volume level. All is very quiet up to the little soloing synth at 1:25, where it becomes just fragile. The next section that followed at 1:50 has these "waaaooooowww" synths playing over more arpeggiators. It is still very very quiet.

"Swinging Spathyphiliums" has a more upbeat melody and a drum machine supporting the numerous synths. Once again the strings here don't have that superficial flavor that I dislike. I guess the amount of very artificial synths create a more organic vibe when united.

"You Don't Have To Walk A Begonia" is a playful little tune, very childish. Maybe it is the toy-like synth that plays out the main motif.it is all very relaxing as usual. I do like the main synth that sort of sets the rhythm in the back of the piece. Has a certain retro video game sound to it.

"Mellow Mood for Maidenhair" is pretty much more of the same. Very chill synth tunes that sound very well-written in term so the arrangements.
The closer "music to soothe the savage snake plant" is more ambient-ish at the start and sounds what I expected album to sound like prior to the listen. I feel like the additional Midi stuff thrown around the album like the horns or the strings aren't really a bad (on the contrary, they sounded very nice) but I would imagine plants to listen to more ambient stuff.

I enjoyed this very short album. My only complaint is that it sounds a tad bit dated but it is still a pleasant listen.
Posted by Zen Archer at 7:18:00 PM