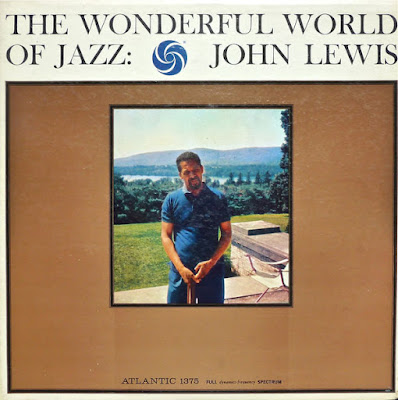 This is one of pianist John Lewis' most rewarding albums outside of his work with the Modern Jazz Quartet. Three numbers (including a remake of "Two Degrees East, Three Degrees West") showcase his piano in a quartet with guitarist Jim Hall, bassist George Duvivier, and drummer Connie Kay. A 15-and-a-half-minute rendition of "Body and Soul" has one of tenor saxophonist Paul Gonsalves' finest solos, while "Afternoon in Paris" features a diverse cast with trumpeter Herb Pomeroy, Gunther Schuller on French horn, tenor man Benny Golson, baritonist Jimmy Giuffre, and guitarist Jim Hall; altoist Eric Dolphy cuts everyone.

The pianist John Lewis, who died in 2001 at the age of 79, is best known as the leader of the Modern Jazz Quartet, but throughout that group's long life (1952–1992), he also composed, conducted, and played music for many other ensembles, large and small, tinged with influences from swing and the blues to Baroque, Renaissance, and Third Stream avant-garde. The Wonderful World of Jazz, recorded in 1960 on the Atlantic label, is one of his more obscure albums, but it's also one of his freshest.
I'd never heard it, until I received this new 180gm stereo LP, reissued by Pure Pleasure Recordings, and now it's among my treasures. A cool, breeze-swaying album, consisting of two Lewis originals ("Afternoon in Paris," "Two Degrees East, Three Degrees West"), two standards ("Body and Soul," "I Should Care"), and Benny Golson's "I Remember Clifford," it was set down in three sessions. The first, on July 29, featured a trio of Lewis, MJQ drummer Connie Kay, and bassist George Duvivier. The second, on September 8, expanded to a quintet with tenor saxophonist Paul Gonsalves and trumpeter Herb Pomeroy. The third, a day later, replaced Gonsalves with Benny Golson and added Gunther Schuller on French horn, James Rivers on baritone sax, and—the shocker—Eric Dolphy on alto.

Dolphy's shining moment comes on "Afternoon in Paris," the album's highlight in every way, a gorgeous tune, the octet shimmering through several choruses in rich five-horn harmony, then Dolphy rips the canvas with a bracing solo—brash in tone, Parker-meets-Coltrane in style—yet he fits right in, Duvivier and Kay stepping up the beat but just subtly, Lewis and the other horns sustaining their lushness: the clashing colors intensify the beauty. There's very little like it anywhere in jazz.

Despite his reputation as a classicist, Lewis championed Dolphy, and this was no aberration. Around the same time, he also put Ornette Coleman on the map, urging Atlantic, his long-time label, to sign him up and to book his quartet at the Five Spot in New York. A few months after The Wonderful World of Jazz, he produced Jazz Abstractions: John Lewis Presents Contemporary Music Compositions by Gunther Schuller and Jim Hall, which featured Dolphy and Coleman, among others ranging from Bill Evans to Eddie Costa. (Good luck finding that one; there is no US pressing, on vinyl or polycarbonate, in print.)

The sound quality of The Wonderful World varies a bit (three engineers are credited, one for each session), but generally it's excellent. Pomeroy's trumpet blares with a golden palpability; all the saxes exude a warm brassiness; the bass plucks; the cymbals sizzle. I received two pressings. The first was quiet except for a swarm of ticks on "Afternoon in Paris" (disaster). The second was dead quiet except for a few ticks on "I Should Care" (I didn't care much). Were these anomalies? I don't know. Get this for "Afternoon in Paris" alone—and if that track is noisy, send it back.

There is nothing hurried about this disc. That said, the music is focused and will stretch your mind. Lewis employed masterful melodic improvisers here : Paul Gonsalves, Eric Dolphy, Jimmy Giuffre, Jim Hall among others. Listen to "Body and Soul" as it builds powerfully and the soloists explore every possible melodic theme, where the quiet power of these master musicians is almost too much to take. Listen to "I Remember Clifford" where the players are essentially the MJQ with Jim Hall replacing Milt Jackson. Listen to "The Stranger" (written by a young Arif Mardin) with that harmonious-yet-discordant brass. This set swings, but oh-so-elegantly. Just like Mr. Lewis.
Steven C. Berry
Posted by Zen Archer at 3:44:00 PM