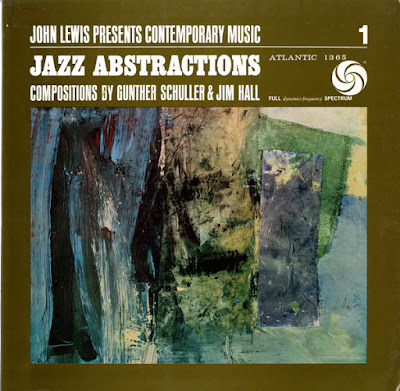 The Modern Jazz Quartet managed that rarest feat of all: to make great art that pleased the serious listener as well as it did the general public. The M.J.Q., as they were known, featured vibraphone, bass, drums, and piano, and yet had the breadth of an orchestra and the intimacy of the most delicate chamber ensemble. Even when they played music written by others, it sounded as though it had been written for them, but they played mostly original compositions by musical director John Lewis, about whom too much can never be said. His was one of those quintessentially American lives a tale of someone who truly invented a life based on a love of music.

John Lewis is certainly a unique figure in American music. Born in 1920, he grew up in New Mexico, graduating from Albuquerque High School in 1937, and from the University of New Mexico in 1941 with a degree in anthropology. Before he joined the army, Lewis encountered both tenor saxophonist Lester Young and composer, bandleader, and pianist Duke Ellington. They were to be formative influences”Young for showing how improvisation can have all the hallmarks of great composition, and Ellington in terms of how to set the music down on manuscript paper without sacrificing its spontaneity. Both these men also reveled in musical counterpoint. And throughout his life, Lewis thrived on the frisson that one good idea engendered. In fact, many of his achievements can be viewed through a prism of action and reaction. Lewis was an avid student and admirer of European music, and used it as a model from which to launch his own penchant for variations. He managed to retain the flavor of some these influences, yet created an idiom that was intrinsically American. Lewis could made a quartet sound like an orchestra, and knew how to make an orchestra swing and move on a dime like the best small jazz groups.

He collaborated with many of the prime innovators of his time, and was a major force in bringing the savant of “free” jazz, Ornette Coleman, to the fore at a time when the jazz establishment was skeptical, to say the least. Yet Lewis's own music always had a traditional feeling to it. He relied heavily on the blues and the indigenous forms of jazz, but brought them into a wide variety of progressive contexts where they always sounded fresh. Lewis remembered times past, but always created in the present tense. Like many original artists, he had an aura. On the surface a shy, gentle man, Lewis had a will of iron, yet he exuded for the most part a feeling of calm.

Emerging from the army in 1946, Lewis came to New York and met Dizzy Gillespie, who quickly recruited him to join his big band as composer, arranger, and pianist, replacing Thelonious Monk. Gillespie's music was so punishing on the brass players that they had to rest frequently, spelled by the rhythm section. Lewis, vibraphonist Milt Jackson, bassist Ray Brown, and drummer Kenny Clarke, with whom Lewis had served overseas, evinced a natural affinity for each other. This led to the formation several years later of the Modern Jazz Quartet. The intervening years found Lewis freelancing with Charlie Parker, Young, Miles Davis (including the seminal Nonet recordings), and Ella Fitzgerald. Ever the student, Lewis managed to combine his nighttime jazz life with studies at Manhattan School of Music, where he received his M.A. in 1953.

Lewis's piano playing was one of jazz's greatest treasures, though it has been overshadowed by his reputation as a composer, arranger, and musical director. From his first recordings with Charlie Parker and Dizzy Gillespie in 1947, however, it was clear that Lewis brought something new and challenging to the idiom of jazz piano. At a time when young pianists were scuffling to play as fast as they could, and to sound like Parker on the keyboard, Lewis championed a more orchestral/contrapuntal style. His piano frequently functioned behind soloists in the same way that the Ellington or Basie bands did. Lewis's solos were spare and pithy. It was not for nothing that he was sometimes compared to Count Basie for his mastery of space and depth of accompaniment. Both Parker and Lester Young made some of their most inspired recordings with Lewis at the piano. They will become friends for life. Lewis's playing is nothing short of brilliant in its epigrammatic way, which should come as no surprise given his encyclopedic knowledge of the jazz tradition in general, and the Kansas City blues idiom in particular.

John Lewis ranks with Ellington, Mingus, Monk, and Morton as one of the great jazz composers. As an educator, he was a prime mover in the Lenox School of Jazz in the 1950s, and spent many years at the City College of New York in the '70s and '80s in addition to lecturing at Harvard. There were also workshops and residencies all over the world. Largely and unfairly forgotten today is his pioneering Orchestra U.S.A., which was decades ahead of its time in Lewis's desire to cross the musical borders between jazz and classical music at will.

At the center of Lewis's musical life was the aforementioned Modern Jazz Quartet, and it might have very well been the ultimate expression of his love of counterpoint. Lewis sought out a varied group of guests to join the quartet in special projects and this led to a plethora of brilliant music. Among the most notable M.J.Q. pairings were the ones with Jim Hall, the Beaux Art String Quartet, Sonny Rollins, and Laurindo Almeda. As a unit, the group made for a wonderful contrast with the bulk of their peers in the jazz world. No long solos, no endless repetitions of basic form; indeed, Lewis went way out of his way to ensure that every tune sounded different from another. Keys were varied, as were textures and the lengths of the pieces themselves.

These four jazz giants Lewis, Jackson, bassist Percy Heath, and drummer Connie Kay (who replaced Clarke in 1955) were as different as individuals as they were instrumentally when deep in some extended Lewis composition. They meshed perfectly and kept perfect (and swinging) time. They were also a family, with all that implies. Suffice it to say that as individuals they never sounded better than when they played together. The aura is still there”inside the fugues, the counterpoint, the blues, the abhorrence of cant and cliché that was John Lewis and that remains alive in his music.

John Lewis died aged 80 on March 31, 2001, in his last years he recorded a pair of albums for Atlantic, “Evolution,” and “Evolution II,” (1999-2000) which were a beautiful summary of his career. Fittingly, his final concert appearance came in a lavish gala at Lincoln Center in New York, when he played in settings ranging from solo piano to big band.

Although John Lewis is listed as the leader (this album's alternate title is "John Lewis Presents Contemporary Music"), the pianist does not actually appear on this record and only contributed one piece ("Django"). On what is very much a Gunther Schuller project, Schuller composed "Abstraction" and was responsible for the adventurous three-part "Variants on a Theme of John Lewis (Django)" and the four-part "Variants on a Theme of Thelonious Monk (Criss-Cross)"; Jim Hall contributed "Piece for Guitar & Strings." One of the most successful third stream efforts, this LP combines avant-garde jazz with aspects of classical music. Among the more notable stars, altoist Ornette Coleman is on "Abstraction" and "Criss Cross" (both of which have been reissued in his Rhino CD box) and multi-instrumentalist Eric Dolphy is on both of the "Variants." Other musicians in the eclectic cast include guitarist Hall, bassist Scott LaFaro, pianist Bill Evans, and several classical string players. This is very interesting music.
Posted by Zen Archer at 2:26:00 PM