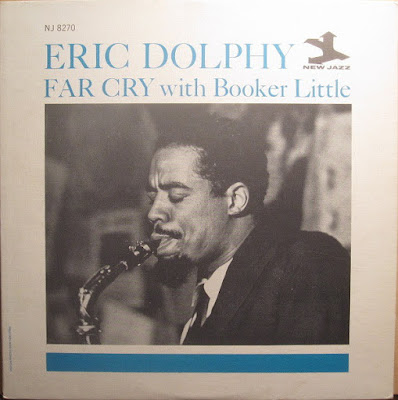 In the early sixties, Eric Dolphy was one of the young rebels responsible for moving jazz forward in giant strides, advancements that led some to call his music “anti-jazz”. Although not quite as deliberately bizarre as Out to Lunch, Far Cry is still exactly that: a far cry from what virtually everyone considered jazz to be. On this session Dolphy is joined by two like-minded weirdos in Little and Byard, as well as an able rhythm section in Carter and Haynes (who benefit the most from the 20-bit remastering). Everything that we’ve come to love about Dolphy is on display here, from the unorthodox instruments to the stuttering, belligerent solos that seem to go from New York to LA by way of Saturn. Although the first two tracks bear titles that pay tribute to Charlie Parker, Dolphy mainly keeps his Bird influences in his back pocket, instead exploring daring intervallic leaps and abstract phrasing (there’s even an unaccompanied saxophone solo, something no one since Coleman Hawkins had really successfully explored). Like Dolphy, Little was another prodigy who died early in his career; his smoothly wandering lines provide a sharp contrast to Dolphy’s prickly approach. Byard, of course, has an affection for all styles of piano playing and often welds them into the same passage, a technique he would really perfect in the company of Roland Kirk. At the time, this was forward thinking music that even today has a whiff of the avant-garde. However, some may prefer Dolphy’s earlier work as a sideman; in more straightforward sessions like Oliver Nelson’s Blues and the Abstract Truth or Chico Hamilton’s Gongs East, Dolphy makes more of an impact, simply because his contributions are so startling compared to the other players. Far Cry, a bold attempt to challenge the status quo, shows how others had begun to catch up to the new thing.
Posted by Zen Archer at 6:48:00 PM