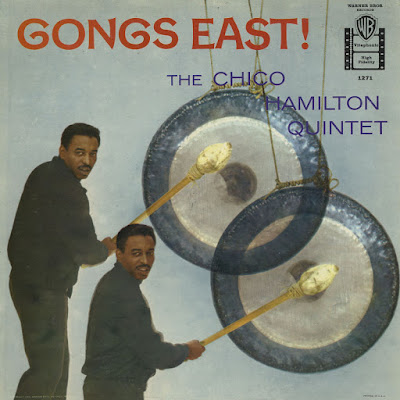 Former Gerry Mulligan Quartet drummer Chico Hamilton formed his own quintet in the mid-1950s and proceeded to record some of the best and most definitive music to emerge from the West Coast "cool" jazz school. He is probably better remembered today, however, for having introduced multi-reedsman Eric Dolphy to the world in the second incarnation of his band. GONGS EAST! was the first album released by that famed lineup, and it's a fine introduction to Hamilton, Dolphy and the subtler side of fifties jazz generally.
At a time when the blues-based post-bop sound ruled the jazz roost, Hamilton was exploring Asian, chamber and avant-garde classical influences, with the ironic result that the leader/drummer is the least-featured player here. Instead, it is Dolphy - in a far more restrained and accessible form than his explosive later performances would lead one to expect - and cellist Nate Gershman who hold the spotlight for most of GE!, though the whole quintet does an outstanding job of realizing Hamilton's influential and historically quite underappreciated vision. All but one of the tunes are covers (and for some reason the track listing is completely jumbled), but the unique chemistry of this unit remakes everything with its own indelible stamp as slow, quiet grooves part like a soft fog, allowing the soloists to shine before closing again with a tinkle of chimes or the distant thunder of a Chinese gong.
Now out of print, GONGS EAST! is well worth seeking out for anyone interested in fifties jazz and/or the duly celebrated musicians involved. For more from this combo, check out THE ORIGINAL ELLINGTON SUITE and Dolphy's HOT, COOL & LATIN. Those were the days, indeed!

Gong's East is easily one of the freshest, most experimental and eccentric sounding recordings in my Jazz collection.   Chico Hamilton, a masterful drummer, has very particular tastes.  For a guitarist to be in his band it helps if he has a sound that is slightly out of the ordinary.  The cello was an instrument that Hamilton enjoyed having in a band too.  The pieces that are selected for Gong's East are really interesting.  They might have been ordinary before for all I know but this quintet makes them stand out.

What really pushes Gong's East over the top is Eric Dolphy, making incredible performances on flute, bass clarinet and alto sax.  I bet most people aren't aware of the fact that it was Chico Hamilton that gave Eric Dolphy his first big break, probably assuming that it was Charles Mingus.  Without owning this recording your Dolphy collection is missing quite a vital piece.  This isn't a weird album in the sense of a Dolphy album as much as it is weird for being completely different.  In my opinion this may be the absolute best that Eric Dolphy ever sounded, out of all of his playing that I've heard.
Posted by Zen Archer at 12:48:00 PM