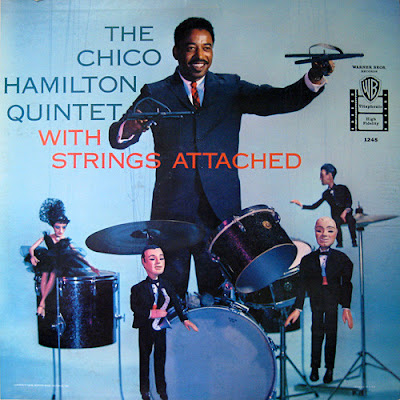 As Ted Gioia noted in his seminal work on the subject of West Coast Jazz: Modern Jazz in California, 1945-1960:

“Despite his aversion to such recognition, [baritone saxophonist] Mulligan continued to exert a strong influence on the California scene until the end of the decade. The use of counterpoint, the emphasis on relaxed tempos, the restrained drum sound, the experimentation with different combinations of instruments, the heavy reliance on compositional structures, the openness to new sounds — all of these remained trademarks of West Coast jazz in the 1950s. ….

Drummer Chico Hamilton was one of those who learned the most from Mulligan's model. Hamilton had performed on many of the early quartet and tentette sides before leaving the group to tour with [vocalist] Lena Home. Along with Shelly Manne, Hamilton contributed greatly to the establishment of a West Coast style of drumming. "It is a very melodic instrument,” Hamilton has said of the drums, "very soft, graceful in motion as well as sound: a sensuous feminine instrument.”

Hamilton reached back to prebebop drummers such as Jo Jones and Sonny Greer in developing his sound. Despite these roots in the big band era, his drum attack was far from old-fashioned; his sensitivity, taste, and dynamic range were fresh and invigorating in the wake of the modern jazz revolution. "When Chico Hamilton took a drum solo," critic Ralph Gleason once wrote, "it was probably the first time in history that a jazz drummer's solo was so soft you had to whisper or be conspicuous.”

Unlike many at the forefront of West Coast jazz, Hamilton was a native of Los Angeles, where he was born as Foreststorn Hamilton on September 21, 1921. ….

[After his stint with Mulligan and with vocalist Lena Horne] when forming his own group Hamilton  … decided to experiment with more diverse instrumentation. The subsequent addition of Buddy Collette, a Los Angeles native born on August 6, 1921, was a major coup. Collette—who was fluent on flute, clarinet, tenor, and alto—gave Hamilton access to a rich variety of tonal colors. … The unusual voice Hamilton was seeking emerged fortuitously when he learned that Fred Katz, primarily known in jazz circles as a pianist, was interested in exploring the jazz potential of the cello. Katz, guitarist Jim Hall, and bassist Carson Smith constituted the "string section" in the new Hamilton unit.” [pp. 187-188]

So given the fact that three-fifths of Chico Hamilton’s quintet had always been comprised of a “string section,” I was only a slightly bemused when Chico was recruited by George Avakian, a producer with a long association with Columbia Records, to join him at Warner Brothers for the release of Chico Hamilton With Strings Attached [Warner Brothers B 1245].

In fairness to Chico, by 1960, the date of the Warner Bros LP, although the guitar-bass-cello format complemented by flute and reeds had remained the same for almost three years, it’s sound had changed when Paul Horn replaced Buddy Collette in the woodwinds section and John Pisano took over for Jim Hall on guitar.

Paul added more clarinet, stressed the alto saxophone and played flute with a more “legit” sound than Buddy, who also favored the tenor saxophone while with Chico, and John Pisano’s guitar wasn’t tuned in fourths as was Jim Hall and his solo were not as angular nor as sparse as Hall’s. During the first three years of its existence, Fred Katz and Carson Smith had remained as constants in Chico’s quintet cello and bass, respectively.

But what I didn’t know when I acquired my copy of Chico Hamilton With Strings Attached [Warner Brothers B 1245] was that Chico had done it again!

Amazingly, he had taken what could have been the fundamentally restrictive range of the Jazz equivalent of a Chamber Group and expanded it to include new “textures” or sonorities which were created by the more harmonic orientation of the group’s new lead voices: Eric Dolphy on flute and alto sax and Dennis Budimir on guitar.

Wyatt Ruther had replaced Carson Smith on bass and Nate Gershman took over for Fred Katz on cello while Fred, who had originally been trained as a pianist stepped up as the arranger for the Warners Bros. date and surrounded Chico and the quintet with a full - you guessed it string section.

The result was the familiar sonority of Chico’s quintet but with a new depth and breadth. In his liner notes to Chico Hamilton With Strings Attached [Warner Brothers B 1245], George Avakian explained the magnitude of Chico’s accomplishment and the context for the recording this way:

“There is a familiar TV commercial in which a slightly self-satisfied voice proclaims, "They said it couldn't be done!' When Chico Hamilton, three short busy years ago, formed a quintet that consisted of drums, bass, guitar, one man doubling a lot of reed instruments, and—this is where night club owners and friends furrowed their brows—a cello, the voices echoed "Couldn't be done, couldn't be done!'

Chico Hamilton did it with success on every front, including the necessary one of paying off the mortgage. His is a musical organization of unusual quality, skill, and variety. Each member is a technician of extraordinary quality who can improvise with rare ingenuity; collectively, they blend tastefully in a seemingly endless number of combinations of sound.

The Chico Hamilton Quintet represents both a challenge and an opportunity to arrangers. An unusual number of musicians have paid Chico the ultimate compliment by asking if they may write for the group. This has served as an inspiration to the Quintet, and has helped keep alive the freshness which has always characterized its music.

In this collection, the Quintet appears both in its original form and with a string section which augments its normal sound, often as a supplement to the role of the cello in the ensemble. Appropriately enough, the arranger who wrote the scores in these particular pieces is Fred Katz, the original cellist of the group, who left the group to concentrate on composition and scoring in Hollywood. He not only wrote many of the Quintet's arrangements, but it was his instrument which gave it its unusual color. Fred's writing, which has been heard in motion picture soundtracks as well as on records, is well ahead of the crowd, though not so far out as to lose his audience. Imagination and sensitivity characterize his work in the slower .tempos; imagination and happy playfulness mark his up-tempo writing.”

Of the musicians on the recording, George wrote:

“The members of the Chico Hamilton Quintet are a mixture of highly-respected veteran musicians and talented youngsters. Leader Hamilton is one of the best-known percussionists in both the jazz and show-business fields. At 18, he played with the Duke Ellington orchestra. A stint with Count Basie followed, but Chico was not content to be only a jazz drummer; he also went into theatre work in Los Angeles, and then combined the two backgrounds in the first long-term engagement of his career—eight years with the greatest night club performer of them all, Lena Home. In 1955, he applied everything he had learned to form the Quintet — a masterful combination of jazz, showmanship, and just plain good music to play and to listen to. Bassist Wyatt Ruther is best known for his tours with the Dave Brubeck Quartet, the Erroll Garner Trio, and with Lena Home. Cellist Nat Gershman is a graduate of the Curtis Institute of Philadelphia and an alumnus of the Cleveland Symphony Orchestra. Newcomers Eric Dolphy and Dennis Budimir are native Los Angelenos; Eric is a discovery of Chico's, and Dennis broke in recently with the Harry James band.”

As to Chico, he moved on to his next surprise - in 1962, he formed a quintet featuring Charles Lloyd on flute and tenor saxophone, George Bohanan on trombone, Gabor Szabo on guitar and Albert “Sparky” Stinson on bass.