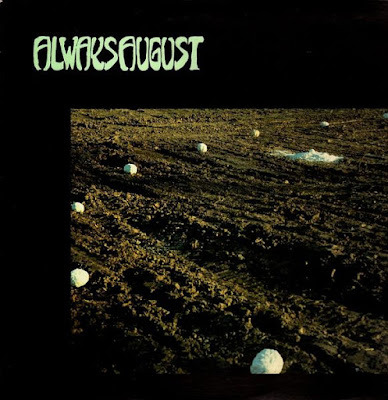 I am now proud to say I own all three albums by this band, one of the last really good bands on SST. Kickin '70's ??jam rock with jazz and improvisational elements like a true modern day Grateful Dead. This 4 song ep is just fine.
Posted by Zen Archer at 7:28:00 PM 2 comments: 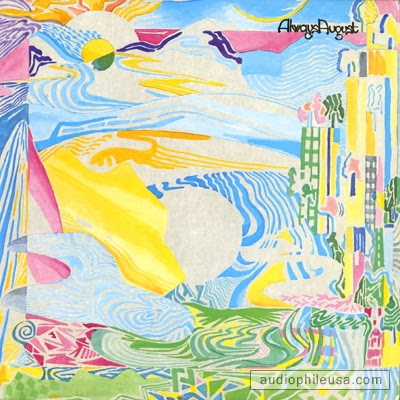 Aaaaaaaaahhh, the SST label.. The best years of our lives, right ?
Very much underrated mid 80s psych rock. Not too many 80s trappings here, the playing is often quiet loose and free-form...not overly-produced. The opener Mass Man, is probably my least favourite track on the album, it's more pop-funk than the rest...so it only gets better from here, imho. Walton's Bluff is an excellent loose psych jam with violin. Into the Dark, is a very fine track...gives me the feeling of staggering back home from some random nightclub at 3am. About Time, is another fine track. These guys were obviously inspired by 60s West Coast psych, Quicksilver, It's A Beautiful Day et al. But not to such an extent that it prevented them from developing their own style or merely being copycats. There's some horns, and a slight funk undercurrent going on. Normally horn rock is not to my tastes, but they fuse it well with their psychie guitar noodlings, and plenty of  violin. Hopefully these guys will be discovered one day, they're well worth a listen!
Posted by Zen Archer at 7:25:00 PM 1 comment: 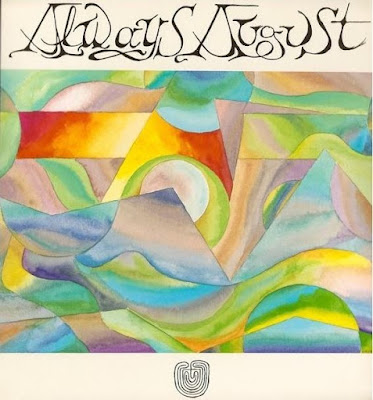 
These guys were something special, it's just to bad no one ever noticed. Great psych rock space trips along the lines of The Meat Puppets at their best, and of course The Grateful Dead. These guys had a horn section as well, but this their debut is the most straight forward of their three recordings.
Posted by Zen Archer at 7:20:00 PM 1 comment: 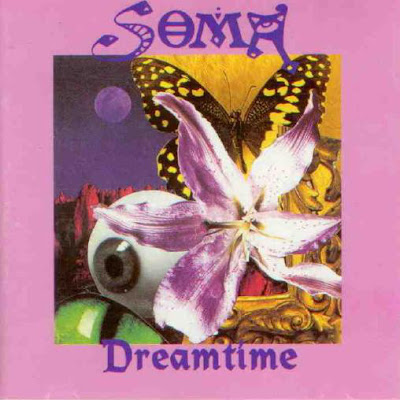 For those of you who remember when Ozric Tentacles broke out big-time in the late 1980's, then you'll probably also recall a host of other bands coming from the UK Festival scene, as well as other astral travelers from the world over. Soma's debut Epsilon was preceded by quite a bit of hype - something akin to "if you love Ozric, then you'll be blown away by Soma". Always a dangerous thing to do, and sure enough Soma's album didn't live up to such a lofty reputation. That's probably no fault of the band, but finger pointing goes to those that were trying to market it to a new, hungry, but discerning audience. However, not living up to an exceedingly high bar is not the same thing as saying the album wasn't any good. Quite to the contrary.

Fast forward to 1995, and Soma's long delayed second album finally gets released (originally recorded in 1992). By the mid 1990s, as mentioned in the Mr. Quimby review, a certain blasé attitude had penetrated the targeted audience. Whether through overexposure, redundancy, or saturation - who knows - but many of us were exhausted of the style. And to top it off, Soma's album was already 3 years in the can, and was now finally being issued by an obscure Italian label with little distribution. I gave it the short shrift back then, tossed it quickly and said "same ol' same ol'" It wasn't fair, but I was still digesting hundreds of new albums in the mid 90s, and only the best of the best were standing out. I recently received a second chance to buy the CD through a used set sale, and I jumped on it.

A revisit has been kind to Dreamtime. In reality, you can hear the band had actually matured, while expanding their sound to incorporate more sophisticated structures. As such, Soma's final album isn't so much a space rock rave-up, but rather a progressive rock album via the Hawkwind lens. Complex meter shifts, and vocal fronted rock music aren't necessarily the common tools of the jamming space rock trade, but are more than welcome to this listener anyway. Too bad Soma didn't really get their chance to shine in the spotlight. I bet a reunion, similar to what Omnia Opera just pulled off, would prove to be quite a revelation.
Posted by Zen Archer at 7:17:00 PM 1 comment: 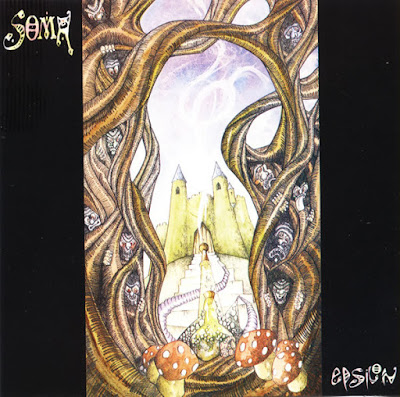 Soma was formed from the Space Rock band Oracle Mind in 1991. The name Soma was taken from the book "Brave New World" by Aldous Huxley. Soma were a band that didn't live up the hype thrust upon it - that hype something akin to "better than Ozric Tentacles". But as I listen to this album for the first time in two decades, I have to say the album doesn't live up to the promise of the very first sequence of tracks presented here. The near 13 minute "first track", which comprises of Being - Ghandarva - My Skin (Turns the Colour of the Sand), is absolutely phenomenal. Some of the best space rock ever committed to tape, with incredible atmosphere, build up, and finally release. The middle section with the solo riffing guitar blazing out of the Moog tweets is jaw dropping in its execution. But the band couldn't keep up the intensity afterward - and it sort of peters out by the end. And the dullish, quiet mix doesn't help matters any. Seems the band could have benefited from an Ozric like production. Still, as with many of the UK festival psychedelic albums, this one has aged well for me.

Mystic Stones, along with Demi Monde, were one of the original leading lights of the creative underground space rock movement in the late 80's and 90s. Strangely the label never did put out a "monster" album, though they have plenty of really good ones - perhaps Mandragora's Temple Ball being the highlight.
Posted by Zen Archer at 7:14:00 PM 1 comment:

Of Perception
1991
So Join Mr. Dreams 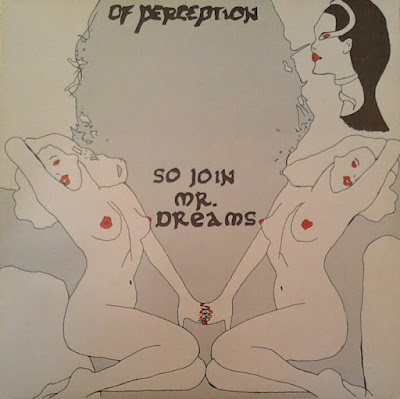 Between 1979 and 1984, Deviant (b. Stuart Powell, Enfield, England; vocals, guitar, keyboards) and Jellyfish (b. Kevin Nicholson, Tottenham, London, England; bass, vocals, keyboards) were the mainstay of the New Wave Of British Heavy Metal band Tooth. After playing in various other groups, the two reunited in 1989 for a jam session with various friends and session men. Within a year they had assembled a stable line-up with ex-Swamp Angels guitarist Dave Williams and former lighting engineer Pete Smith. After a few gigs and two demos they found ex-Neil Christian bass player Arthur Anderson to record/produce and mix an entire album in 24 hours. The resulting So Join Mr Dreams offered a marriage of Doors, Motörhead and Hawkwind influences. It found little favour in the UK but an audience emerged in Europe. Dejected after a tour of Holland fell through at the last moment in 1992, they entered the studio to record a new album with producer Brian Martin. The resultant Lords So Strange R was a much more ambitious project, featuring the debut of female backing vocalist Jazz J. Soon afterwards they broke up, which turned out to be a blessing in disguise. Absent from the music scene, they attracted a cult following in Spain and Germany, as well as in ‘underground’ magazines around the world. The group re-formed late in 1994 minus Jazz J and Smith, and after initial studio work, were joined by session drummer ‘Chops’.

"Well i changed the name of Reptile House to Of Perception, i was on a big Jim Morrison thing at the time (still am!), paul left and we got Pete Smith from indie band Beef in.

But we had so many influences it was difficult to decide what to do, but me and kev decided to do the lot, from acid house dance with a.a.harvey from tonka sound (and the use of mood enhancing back masking) to punk, metal, ballads and dave's protest song.

So we found a producer who worked with Jimmy Page and went into the studio for a 24 hour non stop session loaded with booze, drugs and shit loads of ideas.

Well we did it and produced an album that got few reviews in the uk and poor sales, but in europe they went mad for us, they got what we were trying to do straight away!"

I absolutely love this album... I got it back when it came out because Renee owner of Any Record in Th Hague shoved it into my face one afternoon and told me I would love it, and to buy it, if I didn't like it I could return it next visit... I loved it and kept it! 20 Years later I lost my complete LP collection (Or actually the brother of a friend robbed me) and one of the albums that I regreed most losing was this one... I searched for it for years to no avail until a couple of days ago a friend I had made a cassette copy of it back in the 90's sent me this copy.
I hope you guys like it as much as I do!
Posted by Zen Archer at 7:08:00 PM 1 comment: