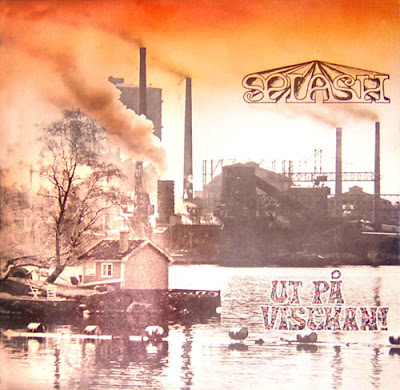 The first disk wonderful Swedish jazz-rock group. Determined Nordic sentiment well-designed music is divided into 8 rather short stories. Skeleton keys are confident Gösta Runkvista against which depict landscapes as many as four wind instrument player, often simply playing in unison. A kind of barrage to a masterpiece: self-titled album, which the group will shoot in 2 years. Very fun and challenging group. Think will attract the attention of fans of the genre, definitely.

Progressive/Jazz-Rock act coming from the city of Söderhamn in Central Sweden.Splash were formed in 1969 as an eight-piece group - some of the members played in the Pop band Why [SWE] in the 60's - however suffering from some line-up changes during their early years.In 1972 the band released the debut ''Ut På Vischen'' on Polydor.By the time they had two sax players Christer Holm and Håkan Lewin and two trumpet/horn players, Leif Halldén and Lennart Löfgren.The line-up included also drummer Jan Erik Westin, bassist/singer Kaj Söderström, guitarist/singer Christer Jansson and keyboardist Gösta Rundqvist.

Splash were greatly influenced by bands lile CHICAGO and BLOOD,SWEAT AND TEARS,so their sound was much driven by the band's horn section, including refined sax attacks, melodic horns and bluesy trumpet parts, especially in the instrumental parts.The keyboard work of Rundqvist still played a major role though, filling the tracks with organ preludes and calm jazzy piano passages.Unlike many Jazz/Blues-based Progressive bands, Splash focused on producing some lovely and melodic tunes,moving far from the Jazz improvised structures, creating thus memorable and delicate song-based material.Vocals are all in Swedish with an excellent color and become real highligh throughout the listening.The style overall is quite rich, polished and elegant.

Good early-70's Jazz/Blues-Rock with nice balance and melodic arrangements, far from being too complicated.A bit dated for today's standards but definitely well-played and recommended.
Posted by Zen Archer at 2:15:00 PM 2 comments: