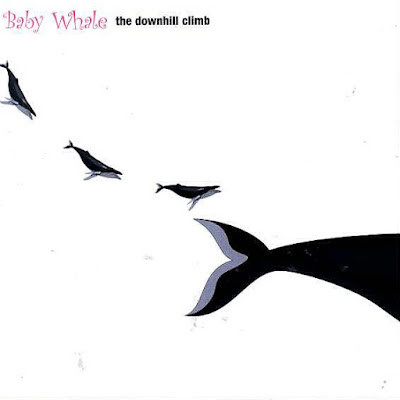 Recorded for DJM Records in 1973

BABY WHALE were a brief and relatively obscure early seventies folk band based out of Cambridge whose sole album sat archived for nearly thirty years before being released on CD in 2002.

The band's genesis came when Cambridge Folk Club resident Nick Barraclough met his future wife Anne Baker, an American in England playing acoustic folk music. The two recruited TOBY JUG BAND guitarist/vocalist Steve Brooks and GOODY TWO SHOES was born. Shortly afterwards Brian Wren and Lindsey Scott would sign on, and the band would change their name to BABY WHALE and appear at 1973's Cambridge Music Festival. During their short existence the group was known to have supported or appeared with such varied acts as VELVET UNDERGROUND, DAVID BOWIE, PRETTY THINGS, MC5, LOU REED, CURVED AIR, CHUCK BERRY and FAIRPORT CONVENTION. Signed to DJM Records, they cut a dozen tracks at Rockfield Recording Studios in Wales, but due to financial troubles the label folded before the record could be properly released. Shortly after those sessions Anne Baker would depart and be replaced only briefly by SALLY OLDFIELD (Mike's sister and half of the folk duo SALLYANGIE) before the group disbanded and its members dispersed to other ventures.

Nick Barraclough would become a well-known BBC Radio 2 disc jockey for many years before launching his own radio music production company in the 1990s. Baker would spend several more years in the music business fronting the more contemporary TELEPHONE BILL & THE SMOOTH OPERATORS as well as supporting Canadian singer BONNIE DOBSON before returning to painting as her creative outlet.

BABY WHALE's folk-cum-rock sound bears a striking resemblance to any number of neo- and alt.country bands that would emerge a decade or so later, including LONE JUSTICE, the BODEANS, and GREEN ON RED. The blend of American, Celtic and British folk instrumentation and arrangements with gorgeous vocal harmonies make for a surprising treat that many folk and prog folk fans will find appealing. The band's sound and story have also been fairly compared to that of the INCREDIBLE STRING BAND.

BABY WHALE were yet another brief chapter in the timeline of progressive folk music that can now be readily enjoyed thanks to the rediscovery and release of their long-dormant studio recordings.

Here’s an album that hooked me from the very first strands, and even though it wanders wildly among several styles and genres throughout I can say happily that even as the last notes play out at the end I’m still pretty enchanted with these guys.
Baby Whale is one of those groups that would have a tough time making a go of things today, and come to think of it they never really made it when they were active back in the early seventies. But thanks to circumstance and some good connections the band managed to leave behind a fairly impressive résumé in addition to a very good album. According to various things I’ve read about them they managed to play live with some notable and varied acts, including Fairport Convention, Chuck Berry, Curved Air, MC5 and Mud (okay, I’ve never heard of Mud). I’ve also read they got their big break as far as a record label contract after appearing at the 1972 Edinburgh Festival (or maybe the Fringe, not sure), and also that Mike Oldfield’s sister Sally was briefly part of their lineup (although she does not appear on this album). The band’s genesis was a chance meeting of future BBC disc jockey Nick Barraclough and American Anne Baker in Cambridge in 1971. The two enlisted Toby Jug Band guitarist Steve Brooks, fiddle player Lindsey Scott, bassist Adrian Kendon and drummer Brian Wren - and Baby Whale was born.

These tracks come from a couple of recording sessions laid down in 1972 after the group was signed to the ill-fated DJM label. But the record wasn’t meant to be, as the label folded before it could be released. The band lived on for a couple of years with varying lineups before finally splintering, with Ms. Baker moving on to the late Pete Sayers’ country group, and later showing up with Barraclough in the soft-rock act Telephone Bill & the Smooth Operators. Most of the remaining members found work in various other Cambridge-area groups.

There are no fewer than three violinists appearing on this album at various times, along with a banjo and a few acoustic guitars, so you should be able to get a sense of the type of music the band played. In addition there are copious helpings of excellent vocal harmonies throughout, alternately calling to mind the best of the Byrds and Crosby, Stills & Nash. At least one of the violins has an electric pickup attached, giving the music an eerie and almost overwhelmingly sad tone at times. The electric violin and blend of British folk, country, bluegrass and West Coast acid folk combine to remind me an awful lot of any number of neo-country or early alt-country bands that came along a decade or more later: Green on Red, the Knitters, Cowboy Junkies, Clem Snide and even Tarkio (who begat the Decemberists). While Baby Whale came years before any of these guys, the similarities are remarkable.

But the band’s influence on the alt-country movement is doubtful since this record never saw the light of day until Kissing Spell stumbled upon it and released it in 2001. And what a great find!

The opening “Old Man and the Sea”, based on the Hemingway novella, is possibly the finest work on the album. Ms. Baker’s vocals wander into Sandy Denny territory at times, while the mournful violin provides substance and range where the rhythm section lacks that, focusing instead on a pretty simple meter and decidedly lazy folk feel. The next couple of tunes will be inescapably be tied to American country thanks to the violin, harmonica and banjo, this despite the fact they both include snippets of British folk standards (“The Cuckoo’s Nest” and “The Cuckoo”, the latter given a different spin thanks to dual violins instead of traditional cellos). But at the same time the heavy tempo and lumbering bass line give weight to the violin and the multi-part vocals flesh this out into a substantive folk number bordering on acid.

“This Time” combines bluegrass with almost ragtime vocals, and I’m not sure this one needed to be included on the album, while “Circles and Circuses” holds up with any number of female-fronted hippy folk tunes of that day. “Dependable Spokes” jumps headfirst into fast-tempo bluegrass with banjo and violins flailing about wildly and with abandon. Not the sort of thing many progressive music purists will cotton to, but I can imagine a whole lot of toothless Cajuns and Cumerlands hill folk would get off the porch and dance to this one.

The band does a passingly good America imitation on “Things are not Free”, and follows that up with a simple folk tune that is made endearing with great vocal harmonies and just the right touch of percussion to augment persistent banjo and acoustic guitar strumming on “Evening Song”. I do believe there is also a Jew’s harp twanging along in the background of this one as well.

The other track I say stands out is the ahead-of-its-time sounding “This Ain't my Life”, a borderline soft rock tune made better once again with whining violins and the kind of done-me-wrong female vocals that any number of country-rock bands would ‘discover’ nearly twenty years later. Think the Dixie Chicks singing an old Linda Ronstadt tune and you’ll get a bit of an idea.

“Cabin Town” and “Easy Feeling” are a couple more slow, acoustic country/folk tunes that don’t do much to either enhance or detract from the overall package, although again I’ll raise up the violin and Ms. Baker’s vocals as noteworthy.

Finally the album closes with a pure acoustic number, mostly guitar, and layered all over the place with great vocal harmonies. An understated tune but a great closing to a surprisingly strong album.

I’ll be the first to admit this music is not for everyone. Even many folk fans won’t take to it much, and those who are inclined to dismiss American country or bluegrass music out-of-hand should be warned off altogether. But if you want to get a listen to what an open-minded group of journeyman British musicians sound like backing a talented American woman with a pure-folk voice and an acoustic guitar strapped around her neck a few years before such things became mainstream, then this just might be for you. For me this is a solid four star effort and a great and unexpected find. Hopefully there are a few curious souls out there who give it a try and agree.
Posted by Zen Archer at 8:29:00 PM 2 comments: Links to this post