Dorothy Ashby
1958
In A Minor Groove 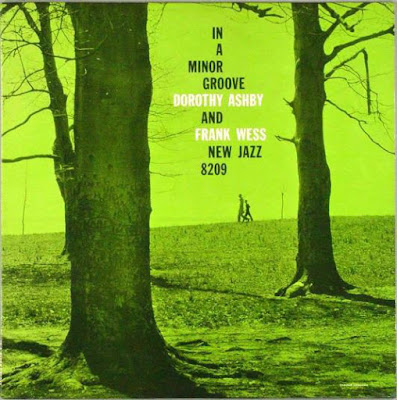 Dorothy Thompson grew up around music in Detroit where her father, guitarist Wiley Thompson, often brought home fellow jazz musicians. Even as a young girl, she would provide support and background to their music by playing the piano. She attended Cass Technical High School where fellow students included such future musical talents and jazz greats as Donald Byrd, Gerald Wilson, and Kenny Burrell. While in high school she played a number of instruments (including the saxophone and string bass) before coming upon the harp.

She attended Wayne State University in Detroit where she studied piano and music education. After she graduated, she began playing the piano in the jazz scene in Detroit, though by 1952 she had made the harp her main instrument. At first her fellow jazz musicians were resistant to the idea of adding the harp, which they perceived as an instrument of classical music and somewhat ethereal in sound in jazz performances. So Ashby overcame their initial resistance and built support for the harp as a jazz instrument by organizing free shows and playing at dances and weddings with her trio. She recorded with Ed Thigpen, Richard Davis, Frank Wess and others in the late 1950s and early 1960s. During the 1960s, she also had her own radio show in Detroit.

Ashby’s trio, including her husband, John Ashby, on drums, regularly toured the country, recording albums for several record labels. She played with Louis Armstrong and Woody Herman, among others. In 1962 Down Beat magazine’s annual poll of best jazz performers included Ashby. Extending her range of interests and talents, she also worked with her husband in a theater company, the Ashby Players, which her husband founded in Detroit, and for which Dorothy often wrote the scores. In the 1960s Dorothy Ashby, together with her husband, formed a theatrical group to produce plays that would be relevant to the African American community of Detroit. This production group went by several names depending on the theater production.

They created a series of theatrical musical plays that Dorothy and John Ashby produced together as this theatrical company, the Ashby Players. In the case of most of the plays, John Ashby wrote the scripts and Dorothy Ashby wrote the music and lyrics to all the songs in the plays. Dorothy Ashby also played harp and piano on the soundtracks to all of her plays. She starred in the production of the play “3–6–9” herself. Most of the music that she wrote for these plays is available only on a handful of the reel to reel tapes that Dorothy Ashby recorded herself. Only a couple of the many songs she created for her plays later appeared on LPs that she released. Later in her career, she would make recordings and perform at concerts primarily to raise money for the Ashby Players theatrical productions.

The theatrical production group “The Ashby Players” not only produced black theater in Detroit and Canada but provided early theatrical and acting opportunities for black actors, Ernie Hudson (of Ghostbusters 1 and 2; credited as Earnest L. Hudson) was a featured actor in the Artists Productions version of the play “3–6–9”. In the late 1960s, the Ashbys gave up touring and settled in California where Dorothy broke into the studio recording system as a harpist through the help of the soul singer Bill Withers, who recommended her to Stevie Wonder. As a result, she was called upon for a number of studio sessions playing for more pop-oriented acts.

Ashby died from cancer on April 13, 1986 in Santa Monica, California. Her recordings have proven influential in various genres. The High Llamas recorded a song entitled “Dorothy Ashby” on their 2007 album Can Cladders. Hip hop artists have sampled her work often, including Jurassic 5, on their album Feedback, as well as Andre Nickatina on his song Jungle.

From the original liner notes for Hip Harp: "In Hip Harp in addition to the interpretations of standards like 'Moonlight In Vermont', 'Dancing In The Dark', 'Charmaine' and 'There's A Small Hotel', Dorothy and Frank work out on three Ashby tunes: 'Pawky', a minor-key blues, 'Back Talk', major-key blues and 'Jollity', a medium-up original. Dorothy Ashby has added to the basic territory that the harp previously occupied. In fusing her sometimes guitar-like, swinging line to the expected harp effects, she has added another step to the instrument-scope of jazz (...)"
Posted by Zen Archer at 7:36:00 PM 1 comment: Links to this post 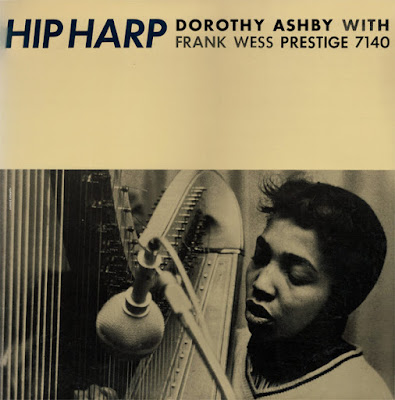 I wasn't sure what to make of this conceptually, can a harp really be hip?  Well I wouldn't go so far as to say it's hip, but it's better than anticipated.  The music is instrumental, and very jazzy and easy enough to listen to and the harp blends in seamlessly.  There are only seven songs on this album but most of them sounded somewhat familiar, like I'd heard them elsewhere before.  It does have a bit of a surprising kick to the music which likely is where the "hip" comes in as some stuff is done here that is rather unexpected but at the same time it never crosses the line to become experimental or anything like that.  It's clear Dorothy has some mad harp skills as she's played the harp on some of the most famous albums you can think of and well it's obvious here too how extremely skilled she is.  Thing is no matter how much you make a harp sound hip, there are very rare occasions where I'll ever be in the mood for such a thing.  If you are looking for mood music for a gathering or something relaxing then this is pretty darned perfect, but it's a little too dull for me to hear more than a handful of times.  It's still neat that this exists and well it's good that harp and jazz had a meeting right?
Posted by Zen Archer at 7:32:00 PM 2 comments: Links to this post