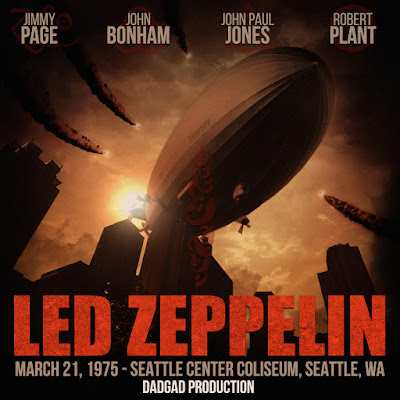 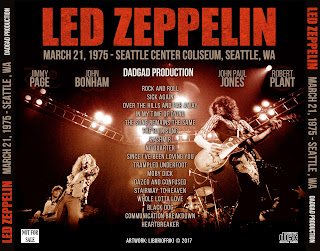 This show is one of the best from the 1975 tour. The entire show and length are impressive, but what makes this so memorable are the two epics. No Quarter is 30 minutes long and one of the best ever. But here, we have the second to last longest ever Dazed And Confused, clocking in at 45 minutes and it is the best one ever (the other one, clocks at 46, can be found on the last LA date, on March 27th). It moves through several sections and has many dynamic contrasts to keep it interesting throughout ... it doesn't seem like 45 minutes.

It begins with a stage announcement asking the crowd not to light any matches during the show or the house lights will be brought up, ruining the light show. The crowd erupts as Rock and Roll crashes into motion. Following Sick Again, Plant announces "well, we went across the border, it was alright, but it's much better back here." Page blazes through an excellent guitar solo during Over the Hills and Far Away. As the song ends, Plant tells the crowd "there's one demand that I'd like to make apart from that you enjoy what we're doin', and that is that you don't sway around too much at the front because somebody might get hurt." In My Time of Dying is an intense sonic assault. Jones's fingers dance across the fretboard as Page tears through the frantic guitar solos during The Song Remains the Same. The Rain Song is excellent.

Page plays a bit of White Summer as Plant dedicates a powerful Kashmir to "everybody who we met in Seattle this time who's been a groove and a gas." No Quarter is introduced as "a journey with more somber intonations." Jones delivers a highly dramatic piano solo which includes hints of Georgia on My Mind. The instrumental section features an epic guitar solo from Page. Jones's playing becomes a bit erratic toward the end. Page solos wildly during the outro. An outstanding performance, one of the best thus far. As the song ends, Plant announces "there's one song that we've done twice in... I suppose since we got ripped off for all that bread in New York ages ago, and because we really dig playin' here, for no other reason we're gonna do it again now" before the second rare appearance of Since I've Been Loving You in 1975. Page blazes through a blistering guitar solo. A fantastic performance. Trampled Underfoot features an aggressive guitar solo from Page. Plant repeatedly exclaims "see saw, knock on my door, gonna swing!" As the song ends, he says "with just a little bit of Gallows Pole thrown in."

Following a marathon Moby Dick, Plant tells the crowd "there's a little bit of a discrepancy about a guitar and a man who's being held by the police and all sorts of things, quite a story going on behind the scenes" before dedicating Dazed and Confused to "the innocent party" and "the difference and the balances between law and order." Page shreds wildly during the lead-in to the bow solo. The Woodstock interlude has been transformed into an amazingly haunting rendition of For What it's Worth. The instrumental machinery is in full swing during the frenzied guitar solo/workout section. Page is absolutely on fire, soloing furiously as Bonzo and Jones hammer along at a frantic pace. The epic journey reaches its peak during the wildly cacophonous outro jam. An utterly devastating performance, one of the best thus far. And at forty minutes in length, one of the longest as well.

Page hints at Louie Louie as Plant offers the crowd a history lesson on famous Seattle musicians before dedicating Stairway to Heaven to "the amount of work that Jimi Hendrix gave... and the amount of inspiration that he gave everybody in the business." Page slowly builds tension before erupting in a furious cascade of notes during the dynamic guitar solo. The final verse is explosive. Whole Lotta Love includes another excellent rendition of The Crunge prior to the funky theramin freakout, which is punctuated by a devastatingly heavy finale. Plant's banshee wails threaten to destroy the taper's equipment during a blistering Black Dog. . A quick and dirty Communication Breakdown is linked nonstop with Heartbreaker. Page blazes through the guitar solos. As the band leaves the stage, Plant announces "thank you very much, we've had a great time... you've been fantastic... Seattle, goodnight!" A truly amazing marathon performance. Must hear.