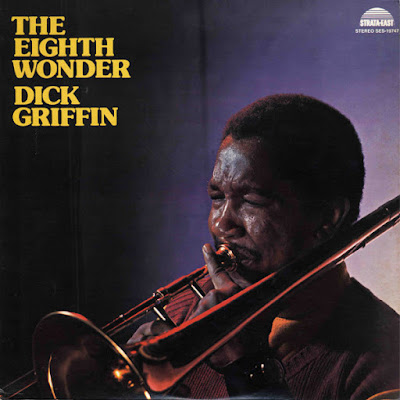 
Trombonist Dick Griffin's big, hearty sound has been a well-defined asset in any of the musical buffets he has taken part in during his long career. Whether part of a James Brown horn section or a small modern jazz band, Griffin's trombone is a steaming dish -- if it was literally part of a smorgasbord spread there would always be several hungry customers lined up behind it, ladles ready. Jazz buffs wanted to dig right in when the trombonist served up his own album for the Strata-East co-operative label in the '70s, but the result was more like a stew that is not fully cooked at mealtime. By the time this one gets to full boil, many of the guests have gone home and hit the hay, to continue the analogy. When Sam Rivers takes off on a tenor solo during "Flying Back Home," the listener does the usual standing at attention, ears cocked, that is a required part of experiencing a Rivers solo. Yet by this time the record has already been flipped, it is only a bit more than ten minutes until the whole thing is over, and worst of all, the Rivers fan has already contemplated in sullen sadness why the first side went by without much more than a few peeps from the man. Bassist Cecil McBee does get in one of his gorgeous bass solos on the first side. He is part of an exceptional rhythm section partly made up of Griffin associates from Rahsaan Roland Kirk's Vibration Society. Kirk would never had let the first side of one of his albums drag so badly, despite his love of ballads. He would have known when enough was enough in terms of a beautiful sound and would have made an effort to shake things up. While an expanded version of these sessions issued on CD in 1995 may reveal other secrets, The Eighth Wonder as originally released shows that Griffin's greatest abilities may not be as a bandleader. Recorded sound and technical execution is as flawless as the multiphonic chops he displays when the needle first hits, but there isn't much sign of the expressive drive that makes the music of many of Griffin's employers over the years so compelling.
Posted by Zen Archer at 7:56:00 PM 2 comments: Links to this post 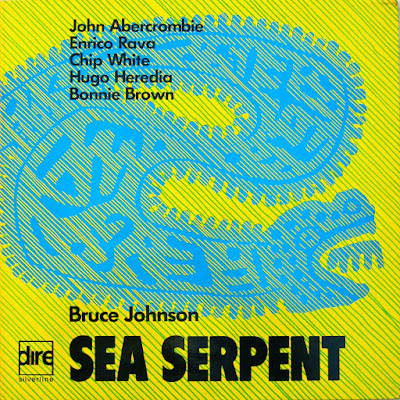 Sea Serpent is an album title that deserves a better album than this. Indeed, the whole notion of mythological creatures would collapse if waiting at the other end of the pipeline were small, strange curiosities such at this record. On one level, at least it can be said that there are things that certain listeners will find of great interest here, none of it easy to shrug off, either. Most important, this album should be studied as a model of just how much yellow ink it is possible to put onto one album jacket. Jazz guitar lovers will find solace here as well. They could chew over several extended solos from both leader Bruce Johnson and the better-known John Abercrombie. Over a generally rapid swinging rhythm section there are passages that even sound something like Sonny Sharrock. This type of playing, sometimes described as "shredding," is combined with a slightly more lyrical approach. Johnson makes rare use of a 12-string guitar on a jazz record, turning in some excellent, imaginative solos that show great command of the instrument. At the same time, his excessive chording on the very same axe waylay horn soloists Enrico Rava and Hugo Heredia, making them fight for air and collapse in the process. The general tone of this discussion will lead to the conclusion that this is a jazz record, and in a sense it is, much of it being taken up by instrumental meanderings to a swing beat and some passages featuring the well arranged, fat-sounding horn section reading written heads. Fans of this type of music will wind up making fun of the other parts of the album, though, songs with lyrics featuring a miserable singer, Bonnie Brown. Intentionally or unintentionally, it is far out territory, though the group proudly delivers a blues in the third act. The poorly translated French liner notes describe the latter piece as a "river blues style," and it does sound like something that crawled up from out of the river, so in the end perhaps it's appropriate for a sea serpent.
Posted by Zen Archer at 7:46:00 PM 1 comment: Links to this post 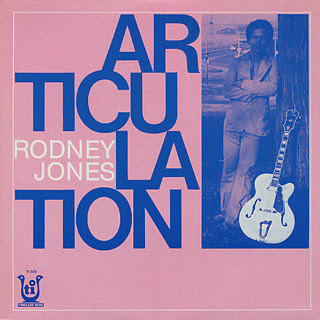 
An overlooked spiritual jazz gem from the 70s – recorded for the Dutch Timeless label, but done in a mode that sparkles with the energy of Strata East at the time! Guitarist Rodney Jones is in some wonderfully hip company for the set – a lineup that includes Kenny Kirkland on piano, Wallace Roney on trumpet, Bob Mintzer on tenor, and Arthur Blythe on alto – all blowing together beautifully with a freely-soaring spiritual energy that reminds us a lot of some of Gary Bartz' more jazz-based albums of the time. And while Jones is the leader, his guitar work often takes second seat next to the well-crafted horn patterns in the set – very well-conceived, and always with a searching sort of post-Coltrane energy.
Posted by Zen Archer at 7:36:00 PM 1 comment: Links to this post 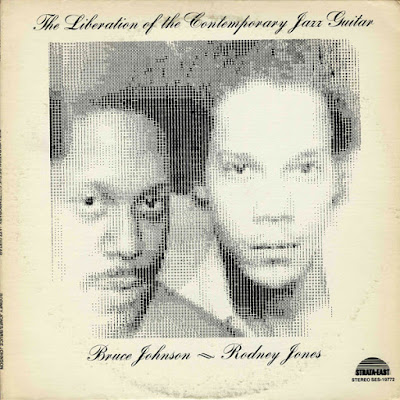 
This has to be the most self sufficient album on the strata east label. Apart from four thank yous, all the credits: guitar, producer, composed, arranged, engineered, cover design and liner notes all go to Bruce Johnson and Rodney Jones. Musically... Well, it's so not my kind of thing, that it would be unfair of me to critique it. However, if noodley guitar work is your bag, then give it a go. Personally, when there's more rhythm guitar going on, I really like it, but I really could do without the soloing, that's where I start to struggle. "G.E.N." is a killer though, very jazz-funk, but unfortunately without a beat.
Posted by Zen Archer at 7:33:00 PM 2 comments: Links to this post