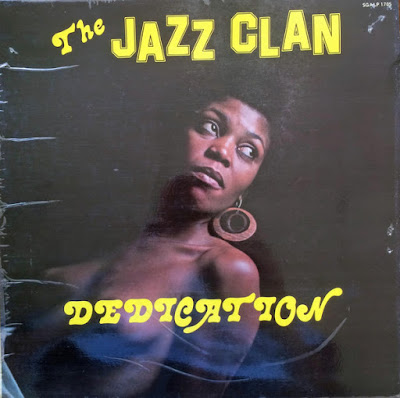 Another South African jazz rarity eventually makes an appearance. This is one of those albums where, in my searching I had found the cover, but could not find the vinyl or the music. So thank you Vusi for coming through with the audio!

Producer Mothobi Mutloatse’s liner notes tell us that Gordon Micky Mfandu was the original leader of “The Clan”, founded as a sixteen-piece band by trombonist Reuben Boy Radise in 1970. This 1973 recording was made following the untimely murder of Mfandu outside his home in Pimville, Soweto. The last track written by Peter Segona and Dimpi Tshabalala is dedicated to Mfandu. Mfandu was also the drummer for the Soul Giants’ “I Remember Nick”, recorded in 1968. Segona (trumpet) and Tshabalala (piano) are responsible for penning five of the six tracks featured on this album.
From the liner notes: “According to the band, their music is no carbon copy of somebody’s. ‘We’re trying to be ourselves as much as possible’, they explained hurriedly as they did not want to be categorised as ‘just another township jazz band’ trying to emulate the Americans.
Here I must point out that it is the Americans who have to learn from us about African rhythms. I mean there are so many Black American groups nowadays which are claiming to be playing Afro-jazz. To my mind, the Clan can teach them a thing or two! That’s African pride for you”. 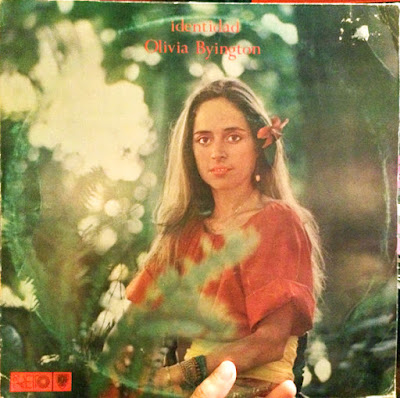 Olívia started her career as a vocalist with the rock band, Antena Coletiva, with Jacques Morelembaum, at the end of the 1970s. She was immediately considered by the critic Sérgio Cabral as the "best singer of her generation". Her first record, "Corra o Risco", was recorded in 1978 with "Barca do Sol." The following year, Olívia reached the top of the hit parade with the song "Lady Jane".

Her third album, recorded in Cuba on the invitation of Silvio Rodríguez, broadened her horizons internationally. Olívia arrived in Lisbon in 1994, after many albums, shows, music... There, she performed in memorable concerts at the Maria Matos Theater, captivating an audience as yet unfamiliar with her work with her impressive vocal range and singing. Her style is so popular that it impresses with its sophistication, so erudite that it swiftly touches everybody's hearts.

The public and critics responded with such surprise that the following year Olívia went to Belém to perform in the great hall at the city's cultural center. She returned to Portugal for Expo 98 in Évora, Monsaraz, and Aveiro. Recently she performed at Lisbon's Aula Magna, and at Porto's Coliseu with the great Egberto Gismonti. As a matter of fact, Olívia has always been in the company of great names, such as Tom Jobim, Chico Buarque, Edu Lobo, Djavan, Wagner Tiso, Radamés Gnatali, and João Carlos de Assis Brasil.

In 2005, a meeting with the Portuguese poet Tiago Torres da Silva in Rio de Janeiro drove Olívia back to songwriting, which she missed greatly. Having played the guitar from the age of eight, Olívia easily picked up the lyrics of "Areias do Leblon," and brought to the song all the sensuality and music of the beaches of Rio de Janeiro. After this song, others followed, many with the lyrics written by the Portuguese writer, but also songs written by other poets, such as Geraldo Carneiro, Cacaso, and Marcelo Pires.

Songs such as these, so characteristic of her nature, have created the most confessional album of her career, a record in which Olívia not only assumes the role of a great singer, one that the critics and the public are following attentively in Brazil, but as a great song writer, able to create harmonically rich songs, with exceptionally original melodies.

The work being intimate, Byington surrounded herself with friends. She invited Leandro Braga to do part of the musical arrangement, and also the Portuguese Pedro Jóia, who played with her in "Clarão" and "Balada do Avesso", and many other great musicians like Marco Pereira, João Lyra, Zero and Zé Canuto.

She also wanted to share the singing, so she shared the microphone with Seu Jorge in "Na Ponta dos Pés," and with the great singer Maria Bethânia in "Mãe Quelé," a homage to Clementina de Jesus, a deceased Afro-Brazilian singer. Olivia Byington the record has the same characteristics as "Olivia Byington" the singer. The extraordinary sophistication of both record and artist makes these songs originally popular and delightfully erudite. 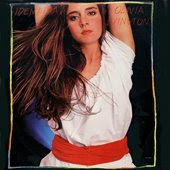 This is Olivia Byington – Identidad (1982), for Egrem / Som Livre, recorded between July and August of 1982 in the city of Havana, Cuba. According with Olivia Byington liner notes, she went to Cuba on year earlier to perform at Festival de Varadero, being invited to record this album one year later. I’m not sure about the availability of personnel information for this session; the album only brings references to the participation of Pablo Milanes and Frank Fernandez, Emiliano Salvador, Jose Bornot and Poveda as arrangers. The repertoire features a blend of Brazilian and songs with lyrics in Spanish. and produced by Silvio Rodriguez

As usual with Cuban releases no info on musicians playing on the album etc etc... probably members of Pablo Milanes backing band and/or Afrocuba, both Silvio and Pablo can be heard doing back up vocals here and there... but if anyone has any detailed session info please share it with us!
Posted by Zen Archer at 12:27:00 AM 1 comment: