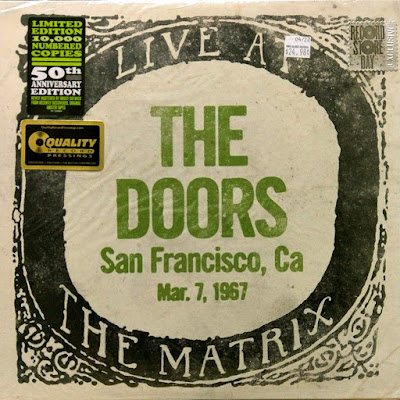 Originally recorded on March 7, 1967 in San Francisco, Live at the Matrix has been newly mastered from recently discovered original tapes by the historic Doors engineer, Bruch Botnick. The Matrix recordings originally released in 2008 were from a third-generation source, so the sound quality of the versions on this vinyl are second to none. Limited to only 10,000 numbered prints worldwide,

The Matrix was a renovated pizza shop owned by Marty Balin of Jefferson Airplane. Balin opened the club to showcase the Airplane early in their career. The venue was small, only holding about 100 people, and the atmosphere was subdued. On one wall was a mural of the Four Horsemen of the Apocalypse armed with musical instruments, and Hunter S. Thompson frequented the nightclub. This was the scene and the atmosphere The Doors played in at The Matrix.

At The Matrix The Doors were sort of revisiting their days at The Whisky. It was an extended booking for five nights in which they played three sets a night. The Doors burned through their entire repertoire quickly and fell back into some of the things that lengthened their songs. Jim Morrison would add poetic interludes into the songs, people’s idea of what constituted a Doors song hadn’t yet solidified, and that lack of audience expectation, plus the fact that The Doors didn’t feel locked in to playing rote renditions of their songs, allowed the band to do what they did best, improvise. They played instrumentals and fell back on some of the cover songs from their Whisky and London Fog days. This may have been one of the last opportunities The Doors had to play with such abandon and freedom.

Now lets hope the complete Matrix tapes get released from this new source!
Posted by Zen Archer at 8:50:00 PM 4 comments: