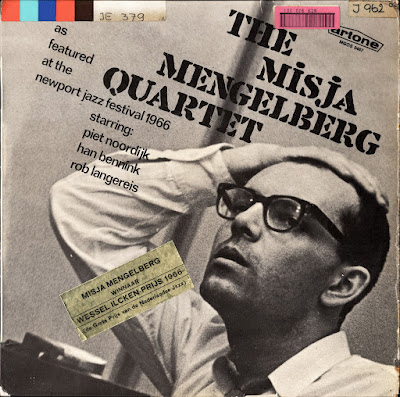 Misha Mengelberg was born in Kiev in 1935 - the son of a Dutch composer/conductor/pianist and a German harpist - but is a lifelong resident of Amsterdam, where he teaches counterpoint at the Sweelinck Conservatory. He wrote his first piece for piano at age four and has been composing pretty much ever since, in the jazz and classical fields. Crucial early influences include jazz pianists Thelonious Monk and Herbie Nichols, the composer John Cage, whom he heard lecture at Darmstadt in 1958, and the absurd-art movement Fluxus, with which he was involved in the 1960s. Mengelberg graduated from the Royal Conservatory in the Hague in 1964. The same year he made his first issued recording, Eric Dolphy’s “Last Date“. That album also features drummer Han Bennink, with whom Misha has had a longstanding duo. In 1966 Mengelberg’s quartet appeared at the Newport Jazz Festival in the USA. The following year Mengelberg, Bennink and Willem Breuker founded the Instant Composers Pool, a landmark in the development of an independent Dutch improvised music, which draws on jazz but does not restrict itself to any one style or aesthetic. (By the time of its 30th anniversary in 1997, ICP Records was the longest “ running musician-owned label in improvised music). In the same period he wrote several “game pieces“ for musicians, notably “Hello! Windyboys“ (1968), over a decade before such gaming became common.

In the 1970s Mengelberg was artistic director of the electronic music workshop STEIM (Studio for Electro-Instrumental Music), served as first chairman of the Dutch improvising musicians’ union BIM, and began leading the Instant Composer's Pool Orchestra. He also recorded in trios with Bennink and either South African saxophonist Dudu Pukwana or German reed player Peter Brozmann, and in duet with is wife’s parrot Eeko. Along with Breuker, Mengelberg is largely responsible for the creation of Dutch “music theatre“, which contains heavy doses of absurdity and improvisation, musical and theatrical.

In the ‘80s Mengelberg presented many music theatre productions and embarked on repertory projects exploring the music of Herbie Nichols, Thelenious Monk and Duke Ellington, with ICP (documented on their CDs “Two Programs - the ICP Orchestra Performs Nichols-Monk“ and “Bospaadje Konijnehol I”, both on the ICP label) and quintets with Bennink and saxophonist Steve Lacy, heard on the albums “Regeneration“ and “Change of Season“ (Soul Note). His recordings in the ‘90s include two acclaimed trio CDs taped in New York with drummer Joey Baron, “Who’s Bridge“ (Avant) and “No Idea“ (DIW); the solo piano recital “Mix“ (ICP) and a duo recording with Bennink, “MiHA“ (both on ICP), and “Jubilee Varia”, a 1997 recording by the ICP Orchestra (hatOLOGY). He also participated with improvised meetings with various European and American musicians, for several labels.

Mengelbergs’s many compositions for reading musicians include “3 Pianopieces“ (1961) and “In Memorium Hans van Zweeden“ (1964 - early minimalism, from his Fluxus years) for solo piano, “Dressoir“ (1977) for the wind orchestra De Volharding, “Rokus de Veldmuis“ for the electro-acoustic ensemble Hoketus (1983), and “To a Deaf Man’s Ears”, a 1996 cantata scripted by Dutch writer J. Bernlef. His orchestral compositions include “With Well-Kind Regards from the Camel“ (1974), “3 Intermezzi“ (1981), “Zeekip Ahoy“ (1984) and “Beestebeest versus Hertie“ (1995). “Onderweg“ (1973) and his 1980 saxophone concerto (played by Ed Boogaard) can be heard on the CD “Misha Mengelberg“ (Pierrot Lunaire/Associazione di Idee) recorded by the Orchestra del Teatro Comunale di Bologna, cond. Ernst van Tiel.

Mengelberg died in Amsterdam on 3 March 2017 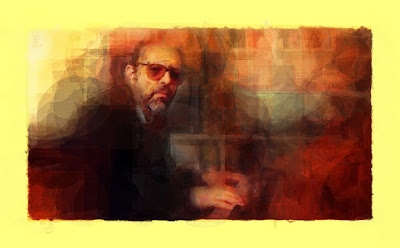 Here we have some pre-ICP recordings by Misha Mengelberg and Han Bennink.
Clearly rooted in the tradition but already with strong hints of their idiosyncratic style which came to the fore only some month later. 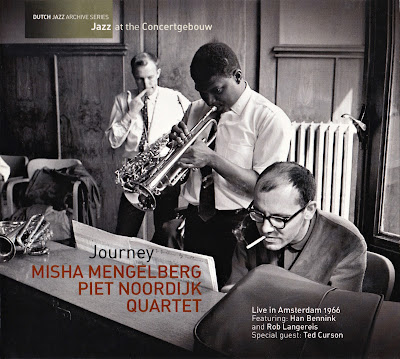 
Recently the fifth album in a great series of unique live recordings was released by the former Dutch Jazz Archive (now: MCN) in its series Jazz at the Concertgebouw. Previous releases contained live recordings by Chet Baker ( 1955), Gerry Mulligan ( 1956), J.J. Johnson ( 1957) and Sara Vaughan (1958), all originally recorded by Lou Van Rees, then Dutch most well-known producer. The Mengelberg-Noordijk album is the first one which features a Dutch quartet, a legendary group with had a certain presence: the Misha Mengelberg - Piet Noordijk Quartet.
Front of the booklet of Misha Mengelberg-Piet Noordijk Quartet - Journey ( MCN 1101)

The quartet features some well known Dutch jazz musicians, like Piet Noordijk on alto saxophone, Misha Mengelberg at the piano, Rob Langereis double bass and Han Bennink on drums. On two tracks the US trumpet player Ted Curson, who was guest player in both the Mengelberg-Noordijk group as in the big band, to be scheduled in the second part of the concert: Boy's Big Band. This band, which belonged to the more progressive big bands in Holland in those days, was directed by Boy Edgar and featured, like a real all-star band, the crème de la crème of Dutch jazz ( including Piet Noordijk and saxophone player Theo Loevendie).
During the 1960s, Ben Zwanink explains in the liner notes (both in English and in Dutch), Jazz in Holland was in crisis ...... the interest in jazz was declining; audience numbers were dwindling, many jazz clubs were closing down and the engagements for musicians were few and far between. The Rhythm and Blues and beat music was popular and the youth were labelled here in Holland as Vetkuiven ( or Dijkers particular in Amsterdam) or Nozems and the beat music fans dressed like The Beatles. Jazz music wasn't hip anymore.
Han Bennink ( photo: Provinciale Zeeuwse Courant ( 16th October 1969) (source: Krantenbank Zeeland)

In the 1960s I was a teenager and, although I visited concerts by bands like The Bintangs or the local famed Delta Generation ( they performed in places where the girls were) not really interested in the new popular artists: I didn't hold strong views about, who was the best: The Beatles or the Stones. I joined around 1970 concerts, were improvised music was played by musicians like Willem Breuker, Theo Loevendie, Leo Cuypers, Maarten van Regteren Altena or Willem van Manen, scheduled in places like Goes ( De Veste) and Middelburg (Stadsschouwburg) by the Stichting Nieuwe Muziek. I remember Han Bennink as one of the most striking musicians that came to this part of the Netherlands. I'm sure I didn't understand what they were playing and I didn't know the ins and outs about what happened in the Dutch Jazz scene of the 1960s - see it as reaching puberty - opposing against the establishment.

The Concertgebouw concert by the Misha Mengelberg-Piet Noordijk Quartet was not the place to be for the young beat and rock and roll generation, but the jazz fans welcomed it. The two leaders of the band Misha Mengelberg and Piet Noordijk were each other's poles apart. Piet Noordijk started his career in the 1950s as an all-round musician, who was fascinated by the music of Charlie Parker. He started his career in the band of his brother Kees who was his eerste en beste leraar ( (my) first and best teacher). He worked with Ger Van Leeuwen, Pia Beck and Frans Poptie before he joined Misha Mengelberg in 1964.
Posted by Zen Archer at 7:21:00 PM 1 comment: Links to this post 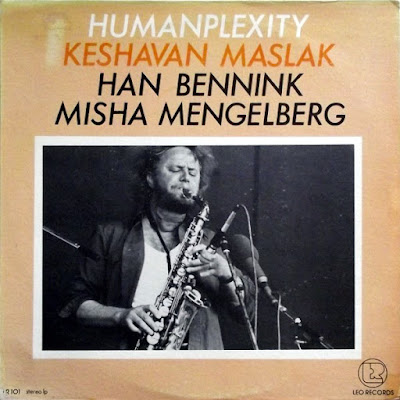 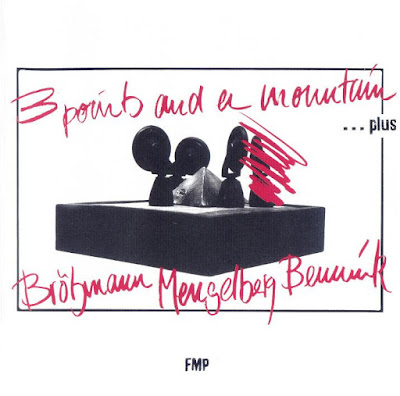 
A different sort of peak in Brötzmann's catalog, Three Points and a Mountain may be his must purely enjoyable album. It offers freewheeling dadaist humor, energetic pastiche, and joyful excursions through a variety of styles and tropes. The expert trio of Brötz, Mengelberg, and Bennink is both focused and gleeful.

Three Points and a Mountain is a surprisingly balanced meeting between hard-blowing reedsman Peter Brotzmann, pianist Misha Mengelberg, and percussionist Han Bennink, who also plays some clarinet and tenor here. Recorded over the course of two days in February, 1979 in Berlin, the results are all that you might hope for from these three, and even more light-hearted than you might expect. Brotzmann travels the range of dynamics (as opposed to his all-out, power-blowing sessions), and there are several duet sections, as well as solo moments for all. The three musicians take turns riling each other as the trio whips up engaging, lively music, and have a grand time doing it -- Mengelberg even lets out an occasional howl in the background. There are also odd moments of the trio swerving into early American piano jazz forms, but by the time this sinks in, Brotzmann, Mengelberg, and Bennink have taken it back out, wiping away the previous moment's impressions. Overall, this is a great and enjoyable session from three of the most creative and unique musicians in European avant-garde music.
Posted by Zen Archer at 7:02:00 PM 2 comments: Links to this post 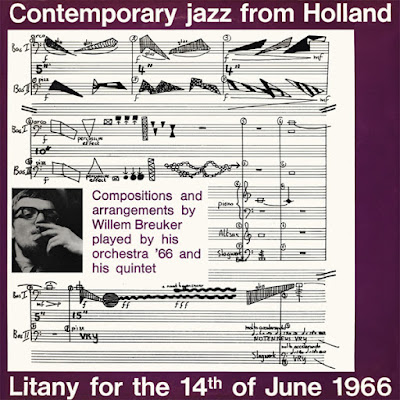 
This is Willem Breuker's first LP under his own name and also one of the earliest recordings of European Free Jazz. Already in this early stage of the socalled "European emancipation" we have not only a small combo but already compositions for a large ensemble. The achievement is quite differrent to Alex von Schlippenbach's Globe Unity from the same year.