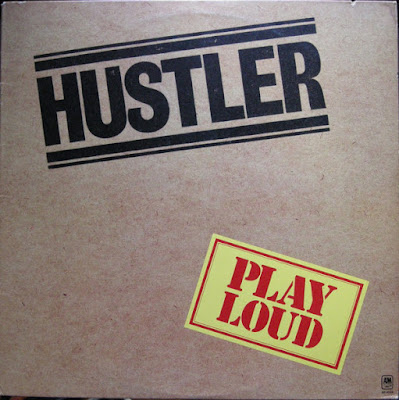 
While Foghat and Status Quo consistently laid down heads down boogie during the high-times '70s, there were numerous groups that attempted to roll in the same vein. It's not easy relevantly reworking songs based on blooze rock power chords and shuffle patterns on a steady basis, but Foghat and S.Q. managed to deliver the goods for several years with their jean jacket racket. Others came up short, as evident by Hustler. Hustler went two albums and out, with the 1975 release of Play Loud putting a punctuation mark on the group's brief run. As expected, there is no new ground broke on the nine song LP, which comes off as standard bar band fare. Opening with "Money Maker", Play Loud features the stompin' boogie delivery of "Little People".
Posted by Zen Archer at 6:37:00 PM 2 comments: Links to this post 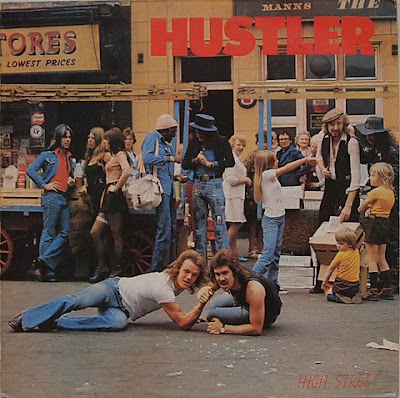 
Produced by Peter Gage, 1974's "High Street" was one of those mid-'70s blues-rock albums that was actually quite good, but ultimately couldn't distinguish itself from the onslaught of similar sounding outfits.  With all five band members contributing to the writing chores, the majority of the collection reflected the band's due to blues-rock bands like Free and Bad Company.  On tracks like 'Piranhas' and 'Midnight Seducer' those blues-rock efforts occasionally included a bit of Deep Purple, or Uriah Heep heavy metal/progressive moves.  With Steve Hayes handling most of the lead vocals, the band had an excellent singer, though he ultimately lacked that certain characteristic that would distinguish him from the rest of the competition.   The same could be said for lead guitarist Mickey Llewellyn.   Exemplified by performances on tracks like 'Just Leave a Good Man' and 'Jack the Lad', Llewellyn was an accomplished, economical player, but there wasn't much to distinguish him from dozens of other talented players.  Would you be surprised to hear me say the same thing about the Tony Beard and Kenny "Tigger" Lyons rhythm section?   The album's most interesting track was also the strangest song.  Written and sung by Llewellyn with a heavy cockney accent, 'Get Outta' Me 'ouse' sounded like some sort of Status Quo, or Slade outtake.  It certainly lacked the polish found on the rest of their FM certified catalog and while it wasn't the album's best performance (that would go to 'Miranda'), it was the most interesting.

"Main Street" track listing:
(side 1)
1.) Just Leave a Good Man    (Mickey Llewellyn - Kenny Lyons) - 4:14
Technically this was a pretty pedestrian slice of blues-rock, but the combination of a seriously catchy refrain, Kenny Lively's lead guitar, and Kenny Daughters' bubbly synthesizers kicked this one out of the pack.
2.) Piranhas    (Mickey Llewellyn - Tony Beard) - 5:30
It opened up with a tasty Lively guitar riff that bore a slight resemblance to the start of Focus' 'Hocus Pocus'.  From there 'Piranhas' found the band taking a stab at a more progressive sound.  You weren't going to mistake this for ELP, but the combination of Steve Haynes  rugged vocals and Kenny Daughters' extended keyboard sections have always reminded me of a mash-up of Deep Purple and Uriah Heep.   A tune that grows on you if given a chance.  You can actually get a taste for the band's live act.  In 1974 they undertook a US and UK tour opened for Queen. on their "Sheer Heart Attack" tour.
3.) Let the Wind Blow  (Steve Haynes) - 3:39
For anyone who thought these guys were a one dimensional hair band, 'Let the Wind Blow' would have come as a major surprise.  Penned by lead singer Haynes who displayed an unexpectedly sweet soul-tinged voice,  this was a pretty and radio friendly ballad that would have made a dandy single.
4.) Uptight Tonight  (Steve Haynes) - 3:40
'Uptight Tonight' found the band returning to standard blues-rock that bore more than a little to the Paul Rogers/Free/Bad Company school of performances.   Along those lines, this one was actually quite good.   The Rainbow performance clip starts around the 11:30 minute mark.  At least to my ears the live version beats the studio version by a mile.
5.) Get Outta' Me 'ouse     (Mickey Llewellyn) - 3:08
Just when you thought you'd gotten your ears around the band's sound, along came 'Get Outta' Me 'ouse'.   Penned and sung by the late (Mickey Llewellyn, this one traded in their radio-friendly sheen for a song that sounded like a castoff from Status Quo.   Easy to see why Llewellyn only got an occasional shot at the vocal spotlight, though the lyrics were pretty funny.  I'm guessing the song's very English sound was the reason A&M tapped it as a single in the UK.  In the States the best the band could do was a promo release.   Interestingly, the 45 featured several edits to the lyrics - example "scruffy little bleeder" was changed to "scruffy little geezer".

(side 2)
1.) Jack the Lad   (Steve Haynes - Kenny Daughters - Mickey Llewellyn) - 5:21
It took forever to actually kick into gear, but if you could get through almost a minute and a half of "street' sound effects, there was actually a sound here.   Other than some nice  Llewellyn lead guitar, I can't say 'Jack the Lad' was anything special, but if you were into mindless AC/DC hard rock, this one might have been up your alley.
2.) Midnight Seducer   (Kenny Lyons - Mickey Llewellyn) - 4:05
The keyboard and bass sound again recalled something out of the Deep Purple, or Uriah Heep catalogs. Just like the title, this one wasn't particularly original or enjoyable.  r
3.) Miranda   (Tigger Lyons) - 5:03
Another Free/Bad Company styled blues-rocker ...  Again, not particularly original, but still enjoyable.   The Rainbow performance clip starts with an energetic performance of 'Miranda':
4.) The Hustler  (Steve Haynes) - 5:17
The closer was also the album's most pedestrian and forgettable performance.   Yeah it was meant to be somewhat dark and threatening, but with the whispered female backing vocals intruding throughout, it came off as almost comical.


Still an active musician until the end, Llewellyn suffered a fatal heart attack in January 30, 2014... Three years ago today, and we still miss him lots.

Anyone interested in checking out the band's live chops should check out the Rainbow performances: 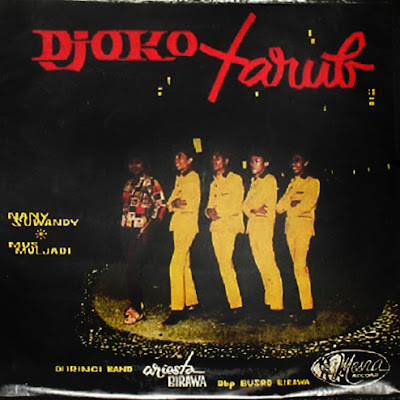 
One of the most sought after albums from Indonesia is Ariesta Birawa’s “first” album which is often called Indonesia’s first psych album. (Enteng Tanamal was already doing some pretty psych-y stuff for some years when that album came out). If you manage to find it, the original version on vinyl, can set you back 2000 maybe 2500 dollars. What most people don’t know is that before that album they already released this album backing Mus Mulyadi, the later King Of Krontjong, This is a great, great 60’s garage album and very, very rare..

Does anyone know the exact date of his album and what the line up was?

Thanks to Madrotter and johnkatsmc5 for reminding me that I had this one waiting to be posted!