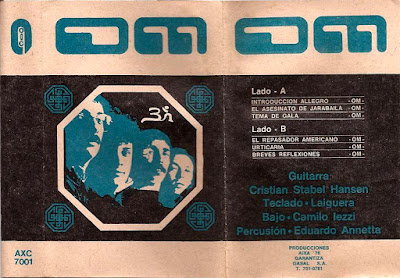 
One of the most amazing bands to ever come out of Argentina, the stuff of legend and holy grails back in their homeland and virtually unknown outside of Argentina.
They are revered by their peers, from Luis Alberto Spinetta to Litto Nebbia (who did some programing on these recordings), They were one of the first bands that really started to play Progressive Rock in Argentina,
Even back in the day they became famous for their technical skills onstage, they never released an album, even thou I heard that one was planed under the name `La Nota En Su Septima Concentracion`, I have no clue if it evr was recorded and remains unreleased or if it was just a working title
The fact is that the only material they ever released in their lifelitme was this 1976 cassette, which is insanely hard to find.
A friend here in Amsterdam once mentioned the band to me, and said he had a tape... somewhere, right after Hanukkah this year and about 20 years after the original conversation he messaged me that he had found it back and had digitalized the whole thing at the radio station where he works!
You will not be dissapointed!

Any other info will be greatly appreciated