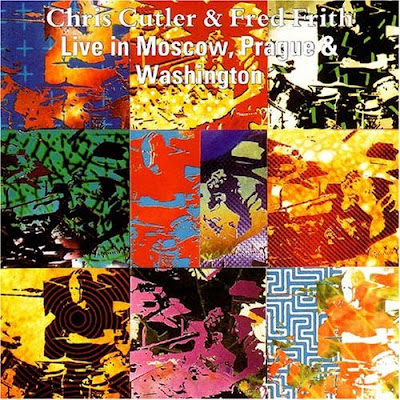 Chris Cutler is predominantly known for his work with the experimental group Henry Cow, but has worked in an amazing variety of musical contexts over the last 25 years. As a drummer, his anti-virtuosic yet subtle and sophisticated style made him popular with both the progressive rock and new music fans.

Contrary to what most people believe, Chris Cutler is actually an American citizen, being born in Washington D.C. in on January 4th, 1947, but raised in England. He began drumming playing to the music of the Shadows and other early 60's bands. In 1966, he joined a local band, Louise, which mixed songs and "improvised electronic row". The group eventually collapsed three years later after gigging quite a bit on the London psychedelic club circuit. After the break-up of Louise, Cutler looked for another suitable outlet, but couldn't find one and, after meeting Dave Stewart (keyboard player in Egg at the time) eventually formed the Ottawa Music Company, a 26-piece composers' orchestra. "We only did about seven gigs in all. The idea of it was that a pool of musicians existed to play music that was composed ideally for them. There were about five composers I guess, and these were mostly composers who weren't in groups and whose music wasn't being heard at all, and who have subsequently just vanished. It's a great shame".

In the summer of 1971, Cutler joined Henry Cow following an ad he'd put in the Melody Maker.  For a while, Henry Cow was absorbed into the Ottawa Music Company. During his 7-year stint with Henry Cow, Cutler toured almost incessantly all over Europe and recorded several studio and live albums, included two in collaboration with Slapp Happy. He also worked intermittently with Gong and both the London Philharmonic and Berlin Radio Orchestras as soloist in David Bedford's Star's End.

It was soon after setting up the Rock In Opposition collective that Henry Cow broke up late in 1978. Chris Cutler kept working with his ex-Henry Cow colleagues, first in the Art Bears (with Fred Frith and Dagmar Krause), then in a variety of spinoff bands including News From Babel (1983-86), the Frith-Cutler improvising duo and various projects by Lindsay Cooper and Peter Blegvad.

Chris Cutler is known as an improviser (in many contexts), in the experimental rock world, at jazz festivals, and in the world of contemporary music. He is also known as lyricist, both for his own and other projects (When, Jon Rose, Biota, etc.). He founded and runs the independent distribution and record company ReR/Recommended, is editor of the ReR Quarterly, the New Music magazine 'unFILEd' and author of the theoretical book "File Under Popular". With the above projects and many others he has made more than 75 records and CDs and toured through Europe (East and West), the Americas (North and South) and Japan. 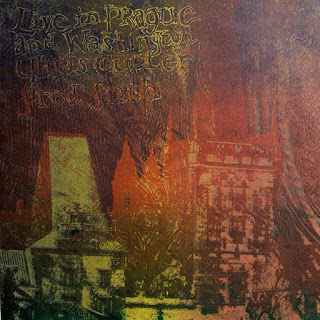 Chris Cutler and Fred Frith first worked together when Cutler joined Henry Cow in 1971. Their first recorded joint composition was on Henry Cow's In Praise Of Learning, and following the demise of Henry Cow they formed Art Bears along with Dagmar Krause. There have also been other projects involving both musicians, including Aqsak Maboul. They have also worked extensively as a duo playing free improvisations all over the world, beginning just before the end of Henry Cow in 1978 (at Reading university), and at the time of writing 3 CDs of their improvised music were in print.

As well as being highly accomplished performers on their chosen instruments, they have both taken an innovative approach to the design and sound of their equipment. Frith has built a number of tabletop guitars which he plays in all kinds of unconventional ways, and uses a range of devices to modify the sound. Chris Cutler has his electric drumkit, a unique set up in which every piece of the kit is fitted with a mike or pick up and run through a mixer and effects pedals. This means that it's not always clear which instrument is producing which noise, and gives both players access to a far wider range of sounds and textures than you'd expect from a guitar/drums set up. The three CDs feature performances recorded between the late 70s (Prague) and the late 90s (Verona), and some had previously been issued on vinyl.

As bizarre as it can be, Cutler and Frith's music is not unprecedented; an improvised music scene already existed in the UK before they started working together, and their music is clearly influenced by artists like AMM and Derek Bailey. What sets them apart is that they were the first generation of free improvisrs to have their roots in rock music rather than in jazz. Like any good improvisors they're not afraid of silence, but they are equally happy making an enormous electric noise. Probably the best album to start with is 2 Gentlemen in Verona, which showcases their dexterity, versatility and phenomenal interplay. Recommended strongly to those with a taste for the unusual and extreme.