Grady Tate
1968
Windmills Of My Mind 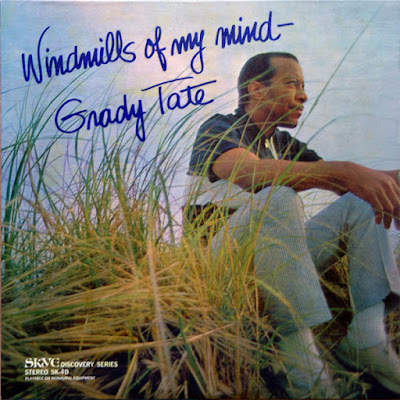 Mention Grady Tate's name to most bop lovers, and his excellent drumming is the thing that immediately pops into their minds. His singing isn't the first thing they think of, which is regrettable because he really is a fine singer. One of the impressive vocal albums he did was Windmills of My Mind, a jazz/R&B release recorded when he was 36. This album (which DCC reissued on CD in 1998) underscores the fact that Tate was never a radical or abstract type of singer; the smooth, elegant crooner heard on "And I Love Her," "The Windmills of Your Mind" and "A Little at a Time" has a lot more in common with Johnny Hartman, Arthur Prysock and even Johnny Mathis (up to a point) than hardcore beboppers like Jon Hendricks, Babs Gonzales and Eddie Jefferson. Although Tate's backing group includes pianist Herbie Hancock and bassist Bob Cranshaw, much of Windmills isn't jazz -- "Don't Fence Me In" and "Would You Believe," in fact, are pure '60s soul music. One of the best tunes on the album is "Work Song," a riveting account of life on a chain gang. The disappointing thing about the CD reissue of Windmills isn't the material, but the sound quality. An abundance of pops, clicks and crackling make the CD sound like a vinyl LP that's been played too often -- one would expect an audiophile label like DCC Compact Classics to do a much better job of digitally remastering a 1968 recording. Nonetheless, this is an album that both jazz and R&B enthusiasts should hear.