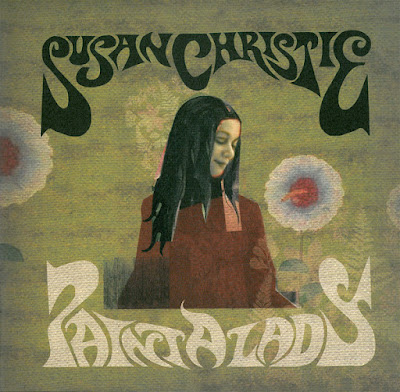 
The material on this album, heard by few until it was issued on CD in the early 21st century, might have been built up as a little weirder than it is by some of the collectors who've raved about it. While it's not the most uplifting stuff in the world, much of it is haunting but not all that out-there pop-folk. Susan Christie's fairly strong, strident vocals and moody melodies, occasionally embellished by strings, aren't the most uncommercial mixture that could have been concocted, though apparently they were too uncommercial to find release when they were originally recorded. What is unusual -- and what sets it most apart from some singers she might bear the vaguest of resemblance to at times, like Melanie, Tim Buckley, Sandy Denny, and Bobbie Gentry -- are the unexpectedly forceful distorted guitars, near-hard rock organ, and angular rhythms and mild dissonance used in some of the arrangements. In addition, for an eight-song, half-hour album, it's certainly unpredictable in the wide territory it covers -- "No One Can Hear You Cry," unlike anything else on the record, is close to sounding like a fine lost Dionne Warwick outtake, though even that gets set aside from the usual Bacharach/David production by the insertion of off-the-wall exotic tinkles of descending instrumental glissandos. If that's not odd enough in this company, there's also a cut, "When Love Comes," that's not too far off early Marianne Faithfull at her best. In contrast, "Yesterday, Where's My Mind?" is freaky at the outset, with its pummeling, tumbling drum breaks, creepy organ, and trippy ominous whisper-to-a-scream recitation, but even that track settles back into a relatively conventional song after three minutes. "For the Love of a Soldier" is another standout, managing to mix affecting antiwar folk-rock with a funky hard rock chorus quite effectively. Though Christie's not quite a major talent based on these relics, this is nicely dreamy and varied folk-rock for the most part that shows a lot of sadly unfulfilled potential, and if it's more downbeat than the norm for the genre, it's hardly gloomy.

The late ‘60s, early ‘70s were such a creative period, it is sad to realize how many albums got shelved and passed unnoticed and given no chance. This album had a press of only three copies.

When I first heard this album, I was firstly reminded of the delicate arrangements of some of The Mamas and The Papas, as imagined as some solo release from a similar group. Not only the arrangements are tight and effective, well thought over and well produced with band arrangements and orchestral touches, but the songs are well chosen and attractive, Susan Christie has also great vocal qualities, a strong combination that deserves to be heard, and that makes repeated listens a real pleasure. “Rainy Day” has some beautiful dark melancholy in the voice and lyrics, while through the music this is uplifted to the acceptable human sweetness of what makes such feeling an ‘experience’ (so not bringing things down, but lifting it into musical pleasantness).

Everywhere the arrangements are perfect, with the right emotionality made stronger by drums or rock added to the more lush orchestrations, (mixed with acoustic guitars,..)… Just now and then associations with a theatrical/filmic emotionality are made possible, as if highlighting a Morricone accompanied movie…and there’s also one real western song, “Ghost Riders in the Sky”, again into the folk-poprock context.

In the middle there’s also one longer track of over 9 minutes called “Yesterday, where’s my mind?”, with a more experimental introduction, in an ESP-LP LSD fashion, with trance spoken word, at first just rhythmically accompanied, with a bit of organ, before the narrator/singer and the organ goes a little bit crazy, as a free-er introduction that still leads to another real song.
Psych-Folk

One of my favorite things to do during these days is to sit out on my roofed porch, preferably in one of the wooden rocking chairs my grandfather built decades ago, and watch the rain fall. If its dark, I light a candle and set it on the hay spool that serves as a makeshift table, and sometimes play some music. Well this Friday happened to be one of those special evenings, and the music of choice for this night was Susan Christie's rediscovered 1970 "Paint a Lady" LP.

Sitting there, listening to the rain fall in hammering sheets as it slapped the tree limbs in my yard and pooled in the field beside my house was a comforting experience, the occasional break caused by thunder in the distance. Hearing this LP in conjunction was almost like being visited by an angel, her soothing voice almost flawless in its tone and character, her effortless vocal beauty melting away whatever stress and complications I might have had. Of course, I recognize some of these songs, some of them are country songs from an earlier time, reworked to benefit Christie's mid-tempo and slower soothing croon. It was just a magical experience of sorts, one where everything is right in the world, at least for me for a brief period of time.

Considering this, you might be surprised to learn that Christie's 1970 LP was never officially released. When she signed to Columbia Records and cut this record for them, it was considered a commericial flop waiting to happen, so Columbia with its infinite and limitless wisdom, scrapped the record and condemned it to languish in obscurity. A whopping thirty-six years later, until Andy Votel "discovered" a copy and the album made its way to being repressed on CD, finding a brand new audience. Why exactly record executives in 1970 would consider an album worthless on the market when it recieved such high praise nearly forty years later is anyone's guess, but it makes you wonder. I suppose it contradicted the happier sounds of the time, with music coming off the relative high of 1960's blues rock, this album by contrast sounds absolutely beautiful but there is a certain eerieness to it. I can't quite put my finger on it, but to my ears its almost like I'm hearing a woman who is tormented by something, that it manages to contaminate even the most beautifully composed poetry and words that she sings. Maybe its just her character, and in my opinion, it adds a certain depth to these songs that otherwise wouldn't be there. Dark, eerie music like this often captures the imagination more than an album that sounds happy and carefree, dark music has always been more appealing to the human mind than something created by happy people.

Songs like "Rainy Day" and the title track are what I'm talking about. Soothing, relaxing numbers, yet there is an innate darkness to them. No doubt Christie's beautiful singing is the highlight of the album, as otherwise I doubt any of these songs would be half as good without her. The really weird part about this album is how unevenly mixed it sounds sometimes, I was particularly disappointed by "Ghost Riders in the Sky." I'm a huge fan of that song and many of its incarnations, and while this one is not offensive, Christie's vocals almost sound buried at times beneath the strings. The song has been slowed down a bit compared to something like Johnny Cash's energetic version, which suits Christie's voice, but again she's almost blotted out by the instruments. On an album like this, where the singer is the most important component, that is NOT a good thing.

Weird how this album never found itself on shelves back in 1970, but its not like its the first time a major label screwed up. Its a beautiful, moody work regardless, the only real anomaly here is "Yesterday, Where's My Mind" which is no doubt the most passionate performance here, but it doesn't really fit in with the rest of the album. Personally I prefer her slower pieces, but nonetheless I can't fathom why any fan of psychedelic folk (which is what it was dubbed) wouldn't like this. I've been into acid folk music for a while now, and this is probably one of my favorite albums in the style (as crude and expansive as that genre is.) Definitely recommended, if for no other reason than to experience Susan Christie's dark songbird like singing.
Posted by Zen Archer at 6:54:00 PM