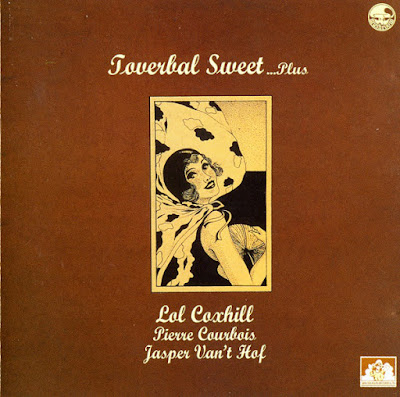 Another great one from Lol Coxhill, a man who should be one of britains national treasures, as great a saxophonist as ever was,yep in my view that is, the equal of Coltrane, Parker, Lester Young, Ayler, Marion Brown , Lacy you name it.

If this sounds like offensive hype, i suggest checking out his extensive ouevre for yourselves. Coxhill remains (despite greater exposure in more recent years)just a name to most jazz fans.

Organised club sessions comprising live contemporary jazz plus recordings of modern jazz musicians such as Charlie Parker, Dizzy Gillespie, Lennie Tristano, Miles Davis and Stan Kenton. From 1950 to 1951 he was 'temporarily inconvenienced by national service in the Royal Air Force' but for the rest of that decade he was a member of: Denzil Bailey's Afro-Cubists (Dizzy Gillespie, Machito compositions/ arrangements); the Graham Fleming Combo touring US air bases in England (Gerry Mulligan/Chet Baker compositions); and Sonny G and the G Men (R&B, standards). He also guested with established British contemporary jazz players, including Joe Harriott, Tubby Hayes, Oxford University Jazz Band as well as playing solo jazz and improvisations on the saxophone. Much of the early to mid 1960s was taken up with touring and accompanying/supporting visiting US artists such as Rufus Thomas (with the television and video release of Walking the dog), Martha & the Vandellas, Screamin' Jay Hawkins and Mose Allison, and to some extent this continued into the 70s with tours by Otis Spann, Champion Jack Dupree, Lowell Fulson and Alexis Korner. However, between 1968 and 1972 Coxhill formed 'Delivery' with Steve Miller, Jack Monck, Pip Pyle and Phil Miller, was a member of the 'Whole World' with Kevin Ayers, David Bedford, Mike Oldfield and numerous drummers, as well as performing in the Coxhill/Bedford duo and the Coxhill/Steve Miller duo. The twelve years from 1973 saw Lol Coxhill become more well known as an improvising musician and solo player, with appearances thoughout Great Britain, Europe, the US, Japan and Canada. At the same time he undertook numerous collaborations with improvisors (as a member of Company), jazz musicians (as a member of the Brotherhood of Breath), rock and blues musicians (The Damned), as well as appearing with experimental theatre groups such as Welfare State. Other collaborations included Trevor Watts 'Moire Music', The Spontaneous Music Ensemble, and AMM. The Recedents (with Roger Turner and Mike Cooper) was formed in this period to perform electro-acoustic improvisations and has been a long-standing interest along with the Melody Four (with Steve Beresford and Tony Coe) - performing original and standard songs, film music, theatre music, jazz and improvisations - a duo with Pat Thomas, a duo with Adam Bohman (both electo-acoustic improvisations though of a rather different hue) and membership of the Dedication Orchestra. Lol Coxhill has also worked occasionally in television and films with a part in Sally Potter's London story, Ken Campbell and Nigel Evans' The madness museum and Derek Jarman's Caravaggio.

National Steel guitarist Mike Cooper, once said he thought lol's relative obscurity was a consequence of his lack of, self salesmanship combined with the fact that he was always too busy just living and breathing music, and raising his children as a single father. if talent and boundless imagination determined a musicians financial status ,lol coxhill would be a multi millionaire celebrated throughout the world as one of the most singular jazz giants of the last 50 years. i say jazz ,because no matter what the setting, wether with free improvisers a rock band, or playing hawaian music, Coxhill always sounds jazzy and joyously so this album may not be his best and it was pretty poorly recorded ,no doubt on a shoe string budget, but coxhill is riveting from first to last. at times his companions seem to provide a 3rd rate canterbury style fusion, most of the nuance in the drumming and the electric piano parts are blotted out my the one dimensional sound .This album was briefly it seems reissued with extra material in 1997, but is not listed on their websites catalog, and references to it are pretty few and far between. we are assuming therefore with a high level of certainty that its OOP. if the cd ever comes back in print snap it up!