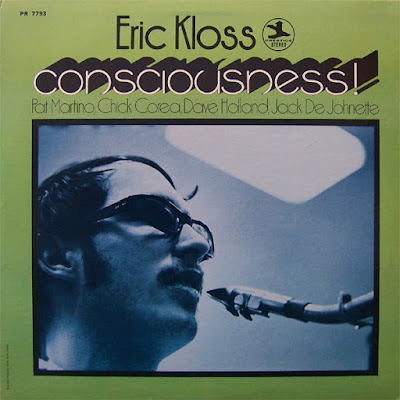 One common feature of every Miles Davis group is the stellar rhythm section -- whether it's Garland/Chambers/Jones, Kelly/Chambers/Cobb, or Hancock/Carter/Williams. Yet one of the best Miles rhythm sections, Corea/Holland/DeJohnette, didn't make much of an impact in the studio; while they were absolutely scorching in concert (as any of the Fillmore concerts will attest to), this 2-on-1 CD gives a good idea of what they could do in the studio.
Eric Kloss was (and supposedly still is) an edgy post-bop altoist, obviously aware of Coltrane's innovations but with a very distinct, individual sound. On some of the tracks he plays tenor. Anyway, he definitely deserves mention alongside Jackie McLean and Gary Bartz.

The first album, To Hear Is To See (tracks 1-5), is relatively more "inside" and it's interesting to hear the rhythm trio swinging in a more conventional setting (one month later they'd be recording Bitches Brew). Like a lot of other jazz cerca 1969-70, there's a definite rock influence both in the rhythms and in Corea's use of the electric piano (he also plays acoustic). Consciousness! (tracks 6-10) was recorded in January 1970, and sounds a lot more like the intense Fillmore recordings. Pat Martino, who joins the band on guitar, is an explosive presence.

This is highly recommended to any fan of Corea, Holland, or DeJohnette as well as to anyone who likes the sound of late 60s post-bop jazz. And besides, you will never hear a funkier version of "Sunshine Superman" in your life.

Eric was a frequent guest on the PBS TV show Mr. Roger’s Neighborhood, second only to pianist Johnny Costa for most appearances by any musician. In 1989 he became a spokesman for Yahoo Music promoting and performing with the sax-like MX-11 wind synthesizer. In the 1990s he began teaching at Duquesne University and went on to become head of the jazz department at Carnegie Mellon University. As an educator and clinician he mentored a new generation of jazz performers and instructors. The Fantasy Jazz label has reissued several of his recordings: First Class, About Time, the 2 CD box set Eric Kloss & the Rhythm Section/Love and All That Jazz, and the 2 CD box set Sky Shadows/In the Land of the Giants. Eric withdrew from teaching and performing in 2001 when he became seriously ill. He continues to write and plans to perform and record if his health improves. The unreleased work Cosmic Adventures demonstrates his musical mastery.

An excellent album from Eric Kloss that again teams him with the Miles Davis rhythm section of the period (Chick Corea, Dave Holland, and Jack DeJohnette) plus guitarist Pat Martino, who was really stretching out at this time. The resultant electric grooves are way different than Kloss' earlier work, yet still much tighter and more soulful than his later stuff -- with some slight bits of funk and soul jazz to keep things real. All tracks are fairly long, and the record features versions of "Sunshine Superman" and "Songs To Aging Children" -- plus the tunes "Consciousness" and "Outward Wisdom"