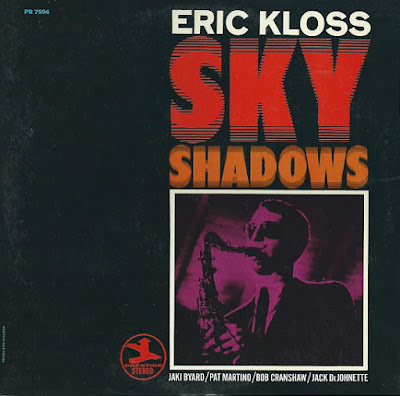 This 1968 release from saxophonist Eric Kloss has many fine points and a couple of puzzling technical lapses. Kloss, heard on alto and tenor, is definitely one of the strengths. Only 19 at the time of this session, the young sax player is well up to the challenge of playing with his more seasoned bandmates. The set reunites Kloss with guitarist Pat Martino, who was with Kloss for the saxophonist's recording debut at the age of 16. The date features four excellent advanced hard bop/post-bop pieces by Kloss and one from Martino. On guitar, Martino is consistently marvelous, both as a simpatico accompanist and as a soloist. Drummer Jack DeJohnette is also superb, and his playing is captured with tremendous clarity and balance. Unfortunately, bassist Bob Cranshaw is mixed so low he is often inaudible. Also odd, pianist Jaki Byard, while bringing his renowned power and versatility to the session, sometimes sounds separated from the rest of the band. Recording imbalances aside, this is a worthwhile set, particularly for the opportunity to hear Kloss in collaboration with Martino again. This music can now be found on the CD compilation Sky Shadows/In the Land of the Giants, which also includes Kloss' 1969 release, In the Land of the Giants.
Posted by Zen Archer at 1:42:00 PM