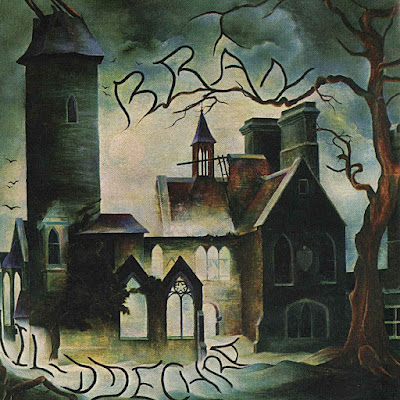 BRÂN were a Welsh band who began life as a marginally progressive folk-leaning act and moved steadily toward a more conventional sound as they shifted lineups numerous times during their five-year existence. Mk4 of the group recorded a third studio album in 1978 shortly before they fractured with the departure of founding member John Gwyn. The band was noteworthy for recording solely in Welsh, a characteristic that surely endeared them to their countrymen but undoubtedly limited their commercial potential.

The band's early lineup included vocalist/keyboardist Nest Howells, whose angelic voice cemented the band's sound well inside folk territory in their early years. She would depart after the second release, when the band would abandon any pretense of progressive music with a heavy guitar attack that has been referred to as "crotch-rock" in their waning years.

Gwyn would go on to a career in television and soundtrack music, while a handful of the remaining members would reform as the mainstream rock band MAGGS, and two eventually formed the boogie-rock act LOUIS AR ROCYRS. Remnants of the earlier BRÂN including Howells would resurface as the prog folk act PERERIN. Nest Howells would also give birth to Welsh pop singer ELIN FFLUR.

BRÂN were a band whose claim to progressive status is largely limited to their first (and some of their second) studio releases; while they would end up as a decidedly conventional band, those first recordings and their ties to PERERIN merit some attention in the annuals of progressive rock.

Brân’s first album is the only one that really fits in the progressive folk fold; the ones that followed only became progressively more commercial-sounding, and by their third with the departure of keyboardist and angelic vocalist Nest Howells the group abandoned all pretense of being anything but a regional b- list contemporary Welsh rock band.
Too bad, because thanks almost exclusively to Ms. Howells (along with the songwriting and pretty decent of John Gwyn) the band showed some promise in the mold of groups like Mellow Candle or Fuchsia. I’ve read several places that the most excellent prog folk band Pererin had its roots in this group, but in reading the various album lineups for both groups the linkage isn’t particularly strong. Indeed, most of the members that remained in Brân by the time their third album released all ended up in very conventional and forgettable regional groups.

This album clearly demonstrates the two sides of the band, at times seeming to almost compete for attention. The opening “Y Ddor Ddig” is a rather simple and melodic pop-rock tune in the seventies mold of bands such as the Bay City Rollers or Greg Kihn Band; nothing progressive, just decent bar- band fodder. Ultimately forgettable.

If you give up after that one though you’ll miss out on Ms. Howells’ near-operatic soprano that fairly drips with rustic, bucolic resonance from the opening notes of “F'annwyl Un” through “Y Gwylwyr “ and “Wrth Y Ffynnon”. Each of these follows a similar pattern of simple rhythm, tasty electric guitar breaks and Ms. Howells plunking away on her keyboards (that sound like a spinet at times) and crooning blissfully. Not really the highest order of progressive folk, but the noteworthy guitar work and tastefully understated bass are just enough to keep things from passing as either traditional folk or pop.

The band actually makes an attempt at mixing their mainstream rock sensibilities with Ms. Howells’ inherently folk vocals on “Myfyrdod” to mixed effect. The guitar work and percussion are cheesy and quite dated, while Nest’s voice comes off awkward and disjointed and results in something that probably felt as unnatural to record as it sounds. Not the track to start with if you want to hear the best these guys had to offer.

Speaking of the Bay City Rollers by the way, check out “Mor Braf” and “Blodyn“ for other examples of that three-chord seventies spandex rock but once again unconvincingly peppered with Howells’ voice at oddly-placed intervals. The latter one sounds more like a tavern drinking-song as well, something I suppose every live band needs in their arsenal but which should be left off studio albums in my opinion.

But the good outweighs the bad here, and tracks like “Caledfwich” and “Y Crewr” with their ballad-like tempo and wispy flute are much more suited to her voice and make the off-kilter songs a bit more tolerable.

The closing “Breud Dwyd” is an interesting and beautiful composition that is undeniably the best track on the album and probably of the band’s career, indolent in a charming way with Howells’ classically- inspired piano solo and delicate organ bleats and a couple of mild guitar forays just pronounced enough to remind you this is rock you’re listening to. The interesting part of this song is that the band also recorded a more upbeat version with vocals, which was released both as a rare single and on a Welsh folk compilation album several years after their demise. Its one of the few times I’ve heard of a band releasing the same basic tune in such distinctly different renditions. Just a bit of trivia but cause for a couple minutes of pondering as to what their intent was.

Anyway, I like this album even with its unevenness and lack of any real masterpiece tracks. Overall I’ll say this is easily decent, though not quite outstanding.
Posted by Zen Archer at 4:38:00 PM