Armand Schaubroeck - 1977 - I Came To Visit, But Decided To Stay

Armand Schaubroeck
1977
I Came To Visit, But Decided To Stay 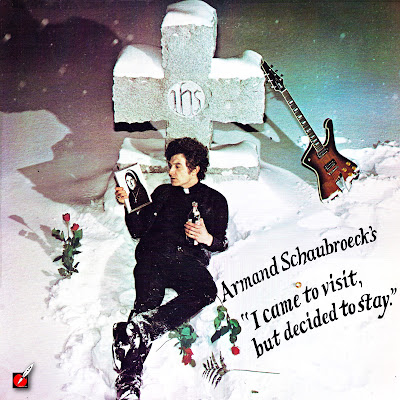 Armand Schaubroeck's second album is a gleefully twisted take on Catholicism, wisely avoiding predictable putdowns of that religion, but on the other hand losing the listener along a conceptual path perhaps too personal, in any case too indistinct, to emerge as a whole. The protagonist (a priest?) sweats outside the door to the convent where his beloved Sister Jennifer, resides. Before too long he's shot and killed Sister Jennifer. But he's still in love with her. Then angels sing. Then, just maybe, Sister Jennifer speaks from heaven. The man definitely decides to pitch a tent over her grave, hence the album title, and more steadfast postmortem devotion since "Long Black Veil" was never intoned. Schaubroeck also sets his gibbering rendition of Edgar Allen Poe's "The Bells" to crackling backing -- and this was 26 years before Lou Reed emerged with The Raven. What the album loses in comprehension it more than compensates for in perverse variations on sainted themes both inside ("Come Softly to Me") and outside ("Auld Lang Syne") classic pop, plus some rip-roaring chops, especially on the harmonica player.
Posted by Zen Archer at 9:10:00 PM