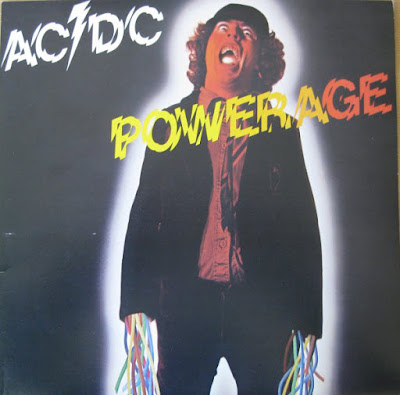 Australian rockers AC/DC were teetering on the brink of worldwide stardom when they released Powerage on May 25, 1978, and though the album didn't quite get them there, it marked an important period of transition for the band and remains a favorite of many fans who feel it is an underrated classic.
Their previous album, Let There Be Rock, had helped the group finally break into the all-important U.S. market, and with Powerage they were poised to bring their raucous brand of heavy-blues rock 'n' roll to audiences all across America. But in retrospect, it doesn't have a standout single, and though there are many strong songs and performances, it remains frustratingly uneven.
Powerage marked the studio debut of bassist Cliff Williams, who replaced Mark Evans, though Evans later said that some of his performances are on the album. It's the last studio album of the classic Bon Scott era to be produced by Harry Vanda and George Young, and it features the unusually treble-heavy sound that marked much of that period of AC/DC's career.
The album is bookended by a pair of classic tracks, kicking off with "Rock 'n' Roll Damnation" and closing with the fist-upside-the-head fury of "Kicked in the Teeth." Both of these tracks -- along with other standouts like "Down Payment Blues," "Riff Raff," "Sin City" and "Up to My Neck in You" -- feature the signature marriage of straight-ahead Angus Young guitar riffing and Bon Scott vocal pyrotechnics that made the band's early work so compelling.
Other songs like "Gimme a Bullet," "What's Next to the Moon" or "Gone Shootin'" don't quite reach those heights, but there's nothing on the album that's anything short of well-played and well-sung.

The album's first pressing featured very different mixes of some tracks and the addition of "Cold Hearted Man," which would eventually see wider circulation through a series of vinyl re-releases and via the Backtracks boxed set in 2009. The tour for the album was captured for 1978's live album If You Want Blood You've Got It, and in 1979 AC/DC broke worldwide with Highway to Hell, the defining album of the Bon Scott era and the last before his tragic death.
Powerage is a much-overlooked album in the AC/DC canon, perhaps most significant historically as the transitional record between Let There Be Rock and Highway to Hell. But its legend has grown over time, with rockers from Keith Richards to Eddie Van Halen praising it as one of their favorite AC/DC outings, and with artists including Guns N' Roses, Twisted Sister, Great White and Bruce Dickinson covering its songs either live or on record.

Many critics dismiss early AC/DC and run straight to Highway To Hell and Back In Black. I don’t know why, but I’d advise you not to make the same mistake, because Powerage is another fun party record that's filled with gloriously unhinged guitar licks from riffmeister Angus Young matched to a terrific batch of tunes. And though originality isn’t this bands stock in trade, their kickass beats (AC/DC are one of the greatest groove bands ever) and Bon Scott’s ragged screeches render such concepts as trivial. Besides, this is one of the few AC/DC albums devoid of obvious filler. I mean, even the lesser tracks here have their virtues, as “Gimme A Bullet” grooves like nobody’s business, while “Gone Shootin’” offers up a relaxed change of pace. Elsewhere, the escalating blooze beats of “Down Payment Blues” are matched to an everyman lyric that we can all relate to, though the band’s misogynist streak unfortunately rears up its ugly head on “Kicked In The Teeth,” one of the album's lesser tracks. Even so, that song still rocks, and the band’s lean, ferocious assault produces other undeniable hard rock winners such as “Rock N’ Roll Damnation” (which has the album's catchiest chorus), “Riff Raff” (Angus at his best), “Sin City” (Bon at his best), and “What's Next To The Moon” (like the aforementioned, even better “Down Payment Blues,” notable for its great toe tapping groove, as is the fed up “Up To My Neck In You” as well come to think of it). Sure, I suppose that none of these songs are major AC/DC classics, but Powerage is chock full of minor classics, even though it's less heavy than its pummeling predecessor, possibly due to a less lively production that yields a tinnier sound. But the songs are catchier and yes, better overall, especially since the band still supplies plenty of wattage. In short, no fan of this electrifying band should be without this killer album, which can power up any party. Note: Cliff Williams replaced Mark Evans on bass guitar duties on this album, giving the band not only a better bass player but another backup singer along with ace rhythm guitarist Malcolm Young (Angus' older brother and by most accounts the band's actual leader, certainly so after Bon died). P.S. I'd argue that Powerage is the most underrated and unjustly ignored album from the Bon years, being all but ignored by radio, and the band themselves have played little from it live over the years (really only "Sin City" and "Riff Raff"), nothing in recent times. In short, this album is for the diehards - most of whom love it.

When the late, great Bon Scott confidently sang the lyrics for the bass rattling "Sin City", the authoritative front man from the hard wired AC/DC told one and all the he's gonna win where the lights burn bright. There was never any doubting the fact that Bon would be victorious... and that fact is banged home throughout the entire Powerage album.

The ass kickin', nine song Powerage recording, issued in 1978, is laced from start-to-close with bitchin' raunch 'n' heavy duty roll. Often overlooked, as Powerage was sandwiched between the release of the killer combo of Let There Be Rock and Highway to Hell, the potent Powerage stands equal to any album from the entire AC/DC caustic catalog.

The high-octane Powerage doesn't possess a hint of filler, nor is there anything close to a mellow note buried in the mix. It's simply an onslaught of mighty riffs, ringing chords, stinging leads and Bon's bad boy lyrics. Opening with the raucous "Rock 'n' Roll Damnation", the three-minute-plus intro cut serves notice that AC/DC were taking charge of the hard rock ranks. The boys chase the rampant "R 'n' R Damnation" with the album's longest track, the down-on-your-luck "Down Payment Blues", which gives way to the biting "Gimme a Bullet", and the volt-meter pegged "Riff Raff".

Bassist Cliff Williams debuted with the Powerage LP, and his fat string work on the aforementioned "Sin City" anchors the stacked deck track, along with Scott's take-no-shit vocal delivery. The Young brothers lock-in on the trio of "What's Next to the Moon", "Gone Shootin'", and the amped "Up to My Neck in You". The keg party soundtrack closes with the neck-snappin' assault of "Kicked in the Teeth".