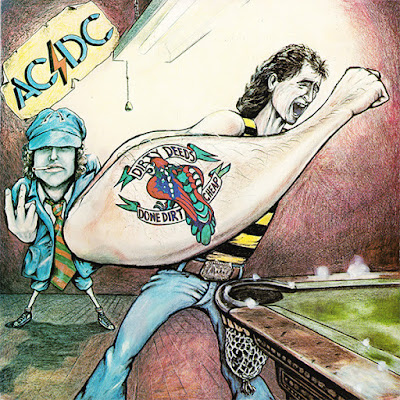 This is the original version of "Dirty Deeds Done Dirt Cheap", first released in Australia and New Zealand on 20 September 1976 and including the track "R.I.P. (Rock in Peace)" 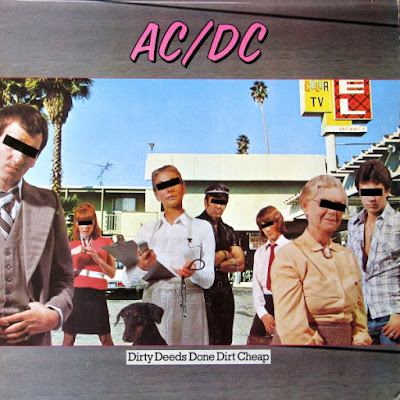 This is the modified international edition was released on Atlantic Records in 1976.
Please note that this album was first released in the US in April 1981.


As they did a couple of times early in their career, AC/DC release both a domestic Australian version and an overseas version of the same album. There are a couple of song differences, and the track line-up is different, so there is a need to review them separately. This Australian release contains two songs that the International release does not, in "R.I.P. (Rock In Peace)" and "Jailbreak" as the substituted songs. These songs are very important in the context of the album.

Following up on the huge success of T.N.T., this album again contains some of the band's best known, most loved and most played songs. Everyone in the world knows the song (and most likely the film clip) for "Dirty Deeds Done Dirt Cheap". It's a terrific song with a great riff, memorable lyrics and the perfect sing-along song. "Ain't No Fun (Waiting 'Round to Be a Millionaire)" is a slow burn, and probably takes to long to get wound up and going, sitting on the same riff and pace for the first half of the song. "There's Gonna Be Some Rockin'" harks back to the start of rock n' roll, a blues based rock song that incorporates a lot of repeated vocals with a blues solo from Angus along the way. It's a bit too repetitive and anodised for my liking. The energy returns with "Problem Child", a song much more like the AC/DC we know and a more suitable solo break from Angus. "Squealer" and "Big Balls" for me are very average songs. I like both to a certain degree, but there just isn't enough in either song to make me say "Yes! Let's play these songs on my random tracks tonight!" "R.I.P. (Rock In Peace)" is the second full-on blues number on the album, and for me fulfils the same thoughts. The blues are fine for blues bands, and I understand that the influences that these guys would have had would have been some of the blues legends, but apart from certain selections the blues bores me to tears. "Ride On" is a great song, a standout on the album more for the reason of its mellow tendencies, a quiet, reflectful tune that does seem to be out of place, and yet fits in perfectly within the album framework. It's not a song you would choose to  play if you are in an AC/DC rocking mood, but its place in the folklore is set.
After a long tough road, we finally get to the closing number, which is another of those classic, legendary songs, "Jailbreak". Again, everyone knows the song, and everyone knows the film clip. It is a great hard rock song, that closes the album on a positive note. When I first bought this album on cassette, I could play the first track, "Dirty Deeds Done Dirt Cheap", and when it had finished flip it over, and it coincided almost perfectly with the start of "Jailbreak", which I would then play. And then the cycle would repeat. To be honest, I think this sort of sums up my thoughts on this album perfectly.

In comparing this album with T.N.T., there really is no comparison. taken away the first and last tracks and Dirty Deeds Done Dirt Cheap would be classed as a very average album by anyone except hardcore, die hard fans of the band. I can add probably three other songs here that I would be able to put high up in the AC/DC catalogue, but the rest would remain in the middle selection.
Posted by Zen Archer at 1:26:00 AM