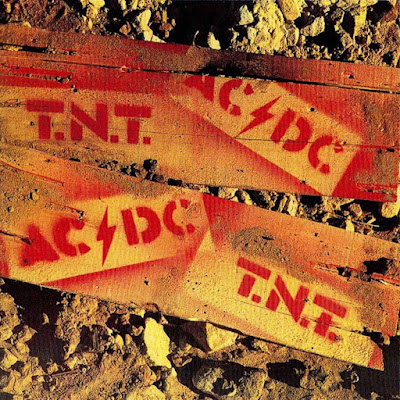 Coming off a solid and satisfactory debut album, AC/DC return for their second opus, one that not only rates as one of the best ever Australian albums, but also as one of the best hard rock albums ever. T.N.T. is a literal hit factory, with great song followed by great song, and only a couple of moments during its 42 minutes that could be considered filler.

There would have to be very few people on the planet who could not at least cobble together a few words or hum the tune of the best known songs here. "It's a Long Way to the Top (If You Wanna Rock 'n' Roll)" is the biographical song of any band, and one that, perhaps ironically, managed to help get AC/DC to "the top". It sometimes goes unnoticed in this day and age, but the introduction of the bagpipes into a hard rock song, which actually enhances the middle bridge of the song, is quite an achievement. Less successful is Bon Scott mimed attempt to play them in the video clip of the song on the back of a flatbed truck going down Swanston Street in Melbourne. It is as popular today as it was when it was released. This is followed by the rocking beat of "Rock 'n' Roll Singer", which in a similar path to the opening track is a sort of biographical song about the path to becoming... well... a rock 'n' roll singer! By this stage of the album it is obvious that the band has got their ship in order, and know what formula they are going to follow - a solid pounding drum beat, supported by a rumbling bassline, with clear, crisp guitar riffs setting the foundations of each song, allowing Bon Scott to star on vocals and Angus Young to flail away when he feels the need to.
"The Jack" is the next song, with its simple drum and rhythm throughout the song, and its repeated chorus line making it a favourite among teenagers especially (I recall a school bus trip in high school where this album was played a lot, and this song got repeated playings joined by the chanting of the chorus by the entire population of the bus). Closing out the first side of the album is "Live Wire", which is one of my favourites. The somber opening of the bass and quiet guitar chords, then joined by the drums and eventually Bon's singing is just brilliant. The song builds wonderfully from the quiet into the pumping hard rock anthem. For me, it would be in my five best AC/DC songs. Extremely underrated.

Side Two opens up with the timeless anthem "T.N.T." which again does a marvellous job of getting the listener to join in singing the vocals. It's hard to resist singing the chorus at the top of your voice, no matter where you are when you are listening to it. "Rocker" could perhaps be classed as filler, if it wasn't for the energy shown by Bon Scott's vocals through the song. It almost feels like an on-stage jam between the band, with Bon coming up with lyrics just to fill the gaps. "Can I Sit Next To You, Girl" is a re-working of AC/DC's first ever single, back before Bon Scott was in the band. The original was sung by Dave Evans. It is patently clear that this is a much better version of the song, not only because Bon gives it a little bit more oomph than Evans, but because the band is sharper, cleaner and tighter.
"High Voltage" is a sister song to "T.N.T." and was inspired by the title of their first album. It was also the first single, released before this album came out, and as a result the single boosted the sale of High Voltage as many people thought that it was actually off that album. Good marketing and selling all round.
The final song on the album is "School Days', a cover of the Chuck Berry song. Now, while this may be an historically great song, and one can only assume that it was an influence on the band members in their youth, I feel it just muddies up the end of the album a little. "High Voltage" is really the best song to close with, letting it finish on a high. "School Days" doesn't tend to do that.

Despite a couple of moments that are a little lacklustre, this is a true classic album. It was the making of AC/DC and was followed by more great albums, a couple that even arguably match this. But for me, this is where it is all capture, in this bottle called T.N.T, the very best of everything this band can offer. The super rhythm section, the brilliant riffage from Angus and Malcolm Young, and the unique vocal capacity of Bon Scott. The complete package.
Posted by Zen Archer at 12:44:00 AM