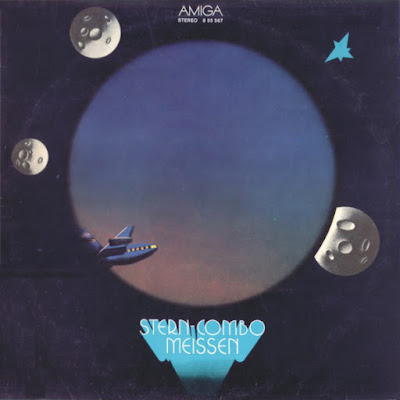 DDR rock band from Meißen/Saxony. They started as beat in the mid 1960's, absorbing western influences alongside developing their own style. As Stern Combo Meissen they reinvented themselves as the foremost progressive rock outfit from the German Democtratic Republic in the mid 1970's onto the early 1980's.

Stern Combo meissen's first LP is a gem of an LP in a field - East German Prog - not exactly bursting at the seams with masterpieces (unlike Italian Prog). But this great debut is worth checking out, blending Hawkwind-lie space-rock with prog dynamics. On "Der Kampf um den Sudpol" the first side opens with atmospheric wind effects until an icy Rick Wright-type organs starts snaking out of the ether in a sublime Eastern modality, while synths fizzle and fart in the background, oscillating their way into the stratosphere. SCM sing in German, which also sets them apart from a lot of german bands (Eloy, Jane), but I think in the end this is better as the German vocal inflection often struggles around English language lyrics (see Grobschnitt's "RockPommels Land"). Stern Combo Meissen's LP's suffer from a bad vinyl pressing like many Eastern European rock LP's but the energy of their arrangements overcomes this one minor quibble. "Eine nacht auf dem Kahlen Berge" opens Side Two with some great keyboard work - its the keyboards that really shine on this LP as the six-man line-up boasts three keyboardists!! Thomas Kurzhals moog work is first rate, reminding me of the style of SBB from Poland. LP closer "Licht in das Dunkel" finishes in style with a great extended Yes-like dynamic, lots of moog-riffs and great swathes of string backing on organ and string-synth (although the sleeves dont' discern - it sounds like SCM use Solina string synths rather than Mellotron's giving them a Tangerine Dream like texture). Overall, a charming little addition to the German Prog collection - a band with a very varied sound taking in influences from Wish You Were Here-era Floyd, ELP, Hawkwind and Yes. A great mix of space-rock and prog and a keyboard players dream.

In 1977 it was time for the first official release of Stern Combo Meissen.Their classic track ''Der Kampf um den Südpol'', already presented live by the group, started hitting the charts and remains actually a hit until today.Surprisingly the official debut of the band was another live recording, carrying the band's name as a title and released on Amiga in 1977.
Not the average keyboard-driven band,Stern Combo Meissen mix in their debut lots of different styles,remaining a band with a wide sound spectrum as in their early years.''Der Kampf um den Südpol'' sounds sort of psychedelic rock with nice organ and is led by the vocals of Reinhard Fißler,while on ''Der Alte auf der Müllkippe'' the funky rhythm section blends with the spacey moog synths of the keyboard duo.''Mütter gehn fort ohne Laut'' is the first track where the band shows of their symphonic tendencies with mellow classical-influenced synths and organs leading the way.''Eine Nacht af dem Kahlen Berge'' is nothing else than Stern Combo Meissen's adaption on the classic Mussorgsky piece ''Night on the Bald Mountain''.A 13 minute track,where the band capture all of the classic piece's dramatic atmosphere through the fiery organ and the closing section full of moog sounds and deep bass lines.''Licht das Dunkel'' closes the album in a rather soft way with hypnotic bass lines around moog solos and dreamy vocals,while its ending sounds like a familiar complex ELP jam.

Stern Combo Meissen were among the daring bands in DDR (East Germany) to produce some highly sophisticated music.Their debut is a nice delivery of classical-influenced prog rock and deserves a wider recognition!
Posted by Zen Archer at 4:19:00 PM