Peter Roar & Lucky Guri
1972
We Are Digging The Beatles 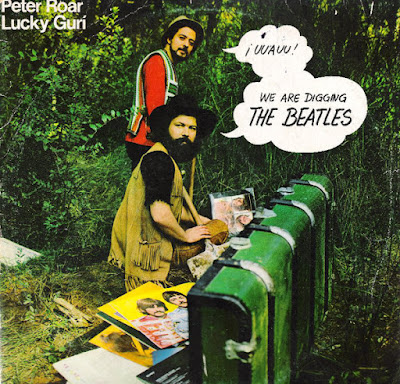 In 1972 Peter Roar ( saxophone ), Lucky Guri (piano), Carles Benavent (bass), Max Sunyer (guitar) and Salvador Font (drums) join him to record one of the most curious records I've seen in a long time. It is a series of versions of themes of the Beatles in jazz key . Shortly after it went on sale, the record label of The Beatles claiming copyright and elepé had to be withdrawn from the market. This fact transformed the disc into a true collector's item!

"In 1972, the renowned jazz pianist, Lucky Guri, was able to record a record of Beatles song versions far from mythification and legend, when the four of Liverpool were still alive. Taking as reference jazz and accompanying a luxury training (Carles Benavent, Salvador Font and Max Sunyer, among others), this is a pioneering work in the versioning songs of the Beatles. In addition, different circumstances had made We are digging the Beatles virtually unpublished until today. Now it is totally updated, remastered and with the respective notes and anecdotes . "

In the conversation that has maintained Àlex and Carles Benavent with the means present has stood out that We are digging the BeatlesIt was sold for two weeks in 1972, quickly retiring due to rights problems. Therefore, this reissue can almost be considered as an important novelty of young artists who forty years later are world-renowned and with an important professional career .

coverIn Lucky Guri, he resolved a doubt that he planned among all those attending on the recording of the disc, thanking the trust that Àngel Fàbregas put in these young talents , this is how it was possible to publish an innovative and pioneering album for that - we can say so far by this time; Max Sunyer has wanted to emphasize that many instrumental productions with versions of the Liverpool group are unknown, and less in the rhythm of Jazz, Big Band, Dixieland, ...

The selection of the songs, as shown in the cover of the album where the different albums of the Beatles are selected from a trunk, was given by Peter Roar and Lucky Guri, as Lucky himself explained: "the cover was made in the Floresta where there were many common hippies at that time. "

Despite being a record of versions, the artists present have wanted to emphasize the great freedom that they had at the time of recording, because each of them could give the best of himself. Giving the record a great personality .

The reissue of this album is part of the process that Picap launched a couple of years ago with the acquisition of the EDIGSA and PDI catalogs in order to recover the historical musical memory of the country; adapting it to the new technologies, making possible the acquisition and distribution at the physical, digital, national and international levels .

Hear it! Monster Forgotten Jazz & Progressive Spanish Underground Scene LP Having a look to the Picture sleeve, seems like a bad joke, but what a surprise hidden behind, was a serious jazz project with the Guitarist Max Sunyer (Vertice, Tapiman, Iceberg..) the bass-guitar Carlos Benavent (Crack, Maquina, Musica Ubana..) drums Salvador Font (Maquina..) and finally Peter Roar (Peter Rohr) Saxo in Maquina and Lucky Guri with a long moog-piano-keyboards history on his back (New Jazz Trio). 11 Beatles’ classics played as a jazz Jam-session.
Posted by Zen Archer at 4:58:00 PM