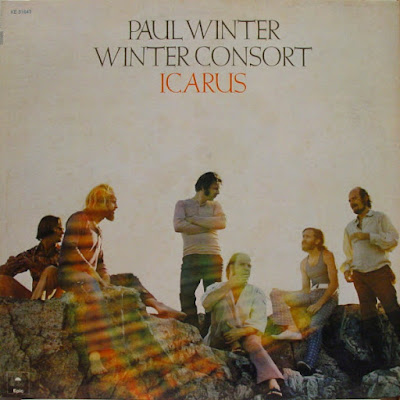 
This 1972 classic captures saxophonist Paul Winter and his ensemble at the height of their improvisational powers. Winter was one of the first artists to incorporate such exotic instruments as the sitar and tabla into his music and the result was memorable chamber jazz-folk played in the wonderfully experimental, post-hippie way only Winter and his merry band could. The title track, one of guitarist Ralph Towner's compositions, became famous for its pensive melody and soaring soprano sax. "Whole Earth Chant" is a piece that foreshadows New Age artists like Loreena McKennitt with its echoing tribal drums interwoven with ominous distorted guitar. And "Minuit" downright borders on what today some would call world music--it features a choir of voices singing a simple, sauntering melody taken from a Guinean folk song. Classic early '70s Winter.

This superb album was not widely known in the seventies in my part of the world, yet these brilliant musicians captivated me with this wonderful music played almost entirely with acoustic instruments, & I have never tired of this album. To this day I do not know anything of their backgrounds, or their previous & later works. My appreciation of this record has remained pure & simple. This work is dated 1972, a year of shining musical inspirations.
When we think of acoustic, we tend to picture acoustic guitars, but just look at the line-up of instruments. Soprano saxophone,cello,oboe,English horn,contrabass Sarrusophone,classical guitar,12-string guitar,Regal,bush organ,Fender bass,conga,tabla,mridangam,surdos,traps,kettledrums,bass marimba,sitar,resonator guitar,& Ghanaian percussion.
The first track titled "Icarus" immediately carries the listener aloft on the air currents & has him/her sailing amongst clouds. One doesn't really come down again until the final track of this album. Next a track with a peculiar title "Ode to a Fillmore Dressing Room" has the unusual combination of sitar,classical guitar,& jazz bass playing in harmony, with tabla drums also,a remarkable performance. Then a simple but deep song with piano accompaniment,"The Silence of a Candle" reflects one man's journey within himself, followed by more soaring sensation from tracks with titles such as "Sunwheel","Whole Earth Chant",& "All the Mornings Bring".
I find the use of soprano sax,oboe,& cello as lead instruments rather refreshing in a music market dominated by electric rock.
The album ends with a truly beautiful West African folk song "Minuit", which just might remain in your head,& in your heart, for evermore. For me this music always seems like a celebration of the Earth, of Nature, & of Humanity. What more can one say? If you seek just one album of acoustic instrumental music for your collection,"Icarus" may very well fulfill that need wonderfully.
Posted by Zen Archer at 1:54:00 AM