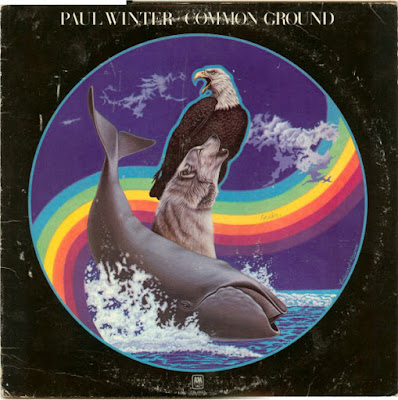 For the past 50 some years, Paul Winter has been the foremost exponent of integrating sounds from nature into environmental-themed music to espouse an optimistic kinship with Planet Earth's myriad creatures. Fusing animal callings with jazz, orchestral, and choral arrangements, folk, and world music, Common Ground is a cohesive concept album with more than its share of beautiful music. Winter's mimicry and accompaniment of wolf and whale on soprano sax is eloquent, though the human vocal passages sometimes verge on a sanctimonious folkiness. His "best of" collection, Wolf Eyes (which features various versions of about half of Common Ground's selections), is a more consistent introduction to Winter's distinctive music.

Cutting his teeth in jazz, and combining his seemingly endless talent and imagination with his love of the earth and its inhabitants -- human and animal alike -- Winter has, over the years, consistently produced melodic, interesting albums that are challenging and comfortable at the same time. Always surrounding himself with stellar musicians -- a cast that has changed over the years, always first-rate -- he has continuously managed to transform his vision and emotion into some of the finest music of our age.
The ultimate tool that has allowed him to maintain his integrity is, I believe, his honesty. There is absolutely no element of pretense in his art -- he feels strongly and deeply about what he's doing, and it's present in every note. He combines various styles of ethnic music from around the world -- African, Brazilian, Native American and more -- with elements of jazz and classical music and sounds from nature (the wolf, the eagle, the whale) into a mix that comes together in such a way as to be seamless. It's as if they were made to fit together -- an audio metaphor for how we should live with each other and with the planet.
There is a comfort and serenity to this music -- and there is joy and rhythm and life. It's almost like a celebratory prayer -- a prayer of thanks for what we've been given in the form of the natural world and its peoples, and a prayer of hope that we don't throw it all away. It's a breathtakingly beautiful, stunning document.
Posted by Zen Archer at 12:34:00 AM